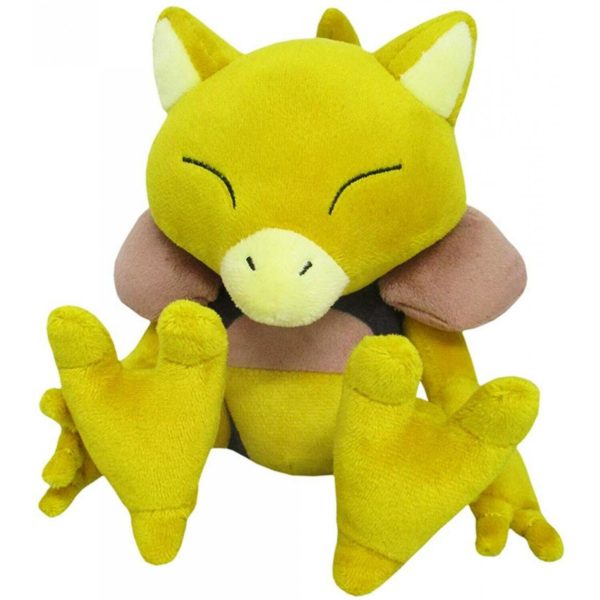 San-ei’s Pokémon All Star Collection plush series features a beautifully detailed version of Abra! Some of the highest quality Pokémon plush on the market come from this lineup. Every plush is constructed out of super soft ‘minky’ fabric and weighted with beans to help them sit/pose.

Abra is a bipedal Pokémon that is primarily yellow. Its face is kite-shaped with a small, pale yellow snout and two short, pointed ears with pale yellow interiors. Its wide eyes are normally closed. Abra’s body is segmented with black skin is visible between its joints and along its neck. It has two brown, pauldron-shaped extensions on its shoulders, as well as a brown, fauld-like piece around its chest. It has three digits on each hand and foot, but its fingers considerably shorter than its toes. Two of its toes face forward and one faces backward. Its tail is thick and long, with a brown band located near the tip.

Abra can sense danger through a telepathic radar. When it does, it teleports to a safe location. However, it sometimes becomes panicked if it wakes in an unknown location. By hypnotizing itself, Abra is able to teleport itself even while sleeping. It can use other extrasensory abilities while sleeping as well and can even teleport into the treetops to pick and eat berries. The deeper Abra sleeps, the father it teleport. Due to the strain of its telepathic powers, however, Abra sleeps 18 hours each day. If it fails to rest long enough, it will become unable to use its powers. The contents in Abra’s dream can affect its powers. Abra lives in urban areas, but has been observed to teleport to a different location once per hour. If it teleports randomly, it can create illusory copies.