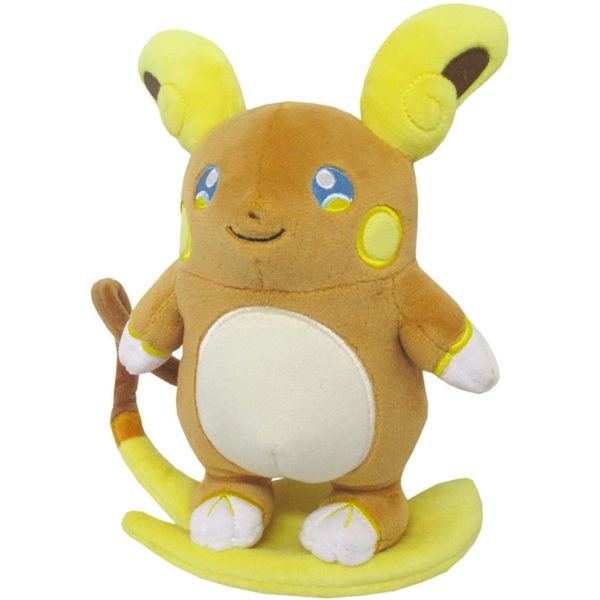 San-ei’s Pokémon All Star Collection plush series features a beautifully detailed version of Alolan Raichu! Some of the highest quality Pokémon plush on the market come from this lineup. Every plush is constructed out of super soft ‘minky’ fabric and weighted with beans to help them sit/pose.

In Alola, Raichu has lighter coloring and more rounded features. Its eyes are blue with yellow half-circles along the bottom. It has large yellow ears with an inner spiral toward the base and brown on the inside. These ears are thicker and less pointed than a standard Raichu’s ear. In addition to its white belly, Alolan Raichu has white markings on its paws with bright yellow lines between its digits. The stripes on its back have also turned white, and there is a small, white circular marking on each heel. The lightning bolt-shaped tip of its tail has rounded edges. By collecting its psychic power in its tail, it is able to ride it like a surfboard and float in the air. While its cheek sacs are still used to store electricity, rubbing them releases a sweet aroma. This is also thought to be connected to its Psychic abilities. Raichu’s transformation in Alola into Alolan Raichu is mostly a mystery, but the people of Alola suggest that it ate too many sweet and fluffy pancakes. Researchers do believe the change is related to diet. Alolan Raichu is also sometimes called “hodad”. It is the only known Pokémon capable of using the exclusive Z-Move Stoked Sparksurfer.