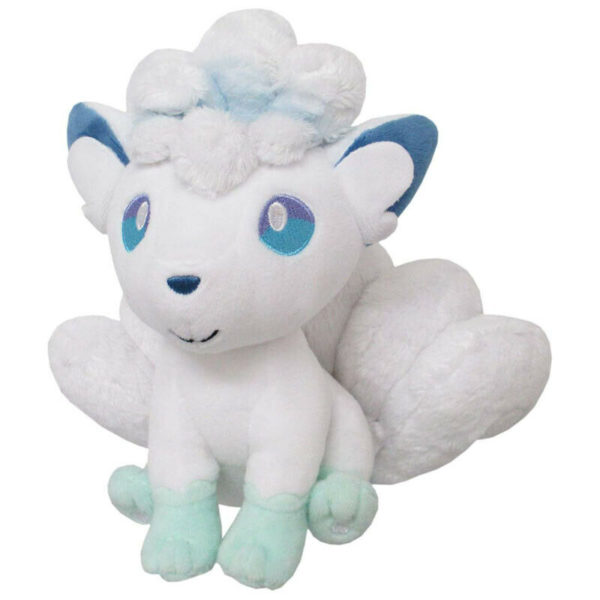 San-ei’s Pokémon All Star Collection plush series features a beautifully detailed version of Alolan Vulpix! Some of the highest quality Pokémon plush on the market come from this lineup. Every plush is constructed out of super soft ‘minky’ fabric and weighted with beans to help them sit/pose.

In the Alola region, Vulpix has adapted to snowy mountain peaks and developed a snowy white pelt. It has pale blue paws, blue eyes, and dark blue insides its ears. Its snout is more pronounced and pointed than that of non-Alolan Vulpix. The locks of hair on its head and its six tails are curlier and have a wispy appearance. Alolan Vulpix is believed to have arrived in the region at the same time as humans but moved to the snow-capped mountain to avoid other Pokémon. It can be found in small packs, called skulks, that are led and protected by Ninetales. Alolan Vulpix can expel breath as cold as -58°F (-50°C), which is capable of freezing anything. While it is not suited to warmer environments, its tail can produce ice to lower the surrounding temperature if needed. An old, local name for this Pokémon is “Keokeo”, referring to its white pelt. Weavile is a natural predator of Alolan Vulpix.