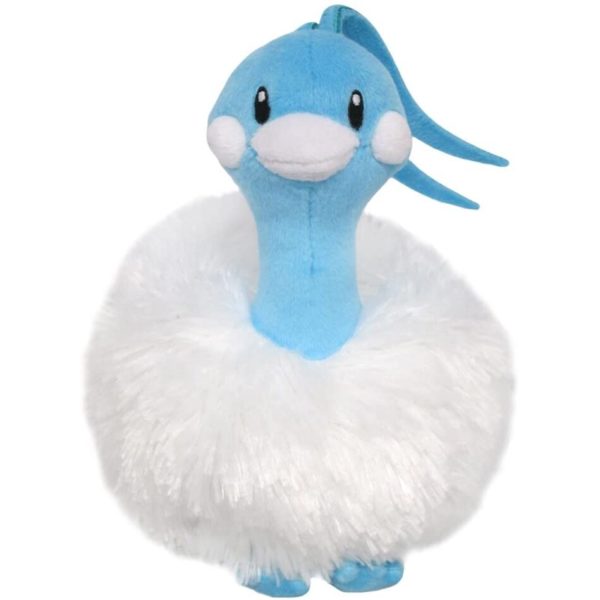 San-ei’s Pokémon All Star Collection plush series features a beautifully detailed version of Altaria! Some of the highest quality Pokémon plush on the market come from this lineup. Every plush is constructed out of super soft ‘minky’ fabric and weighted with beans to help them sit/pose.

Altaria is a blue, avian Pokémon. Its body and cloud-like wings are covered in fluffy, white feathers. It often folds its wings behind it, obscuring its back. Two long, blue plumes extend like streamers from the back of its head. It has a short, hooked beak and prominent cheek patches, both of which are white. Additionally, it has beady, black eyes. It has a long neck and short legs protruding from its fluffy body. The feet are blue with four toes, three claws forward and one backward. The tail is made up of five feathers, the outer two being longer than the inner ones. This Pokémon uses its wings to catch updrafts and soar across the sky. It gracefully glides through the clouds, often while singing or humming in a soprano voice. Its voice seems to have special properties which induce a dreamy state for listeners. Altaria can be very affectionate, enveloping people it has bonded with in its cotton-like wings. Altaria is often found living in forests, though it also inhabits mountain ranges.