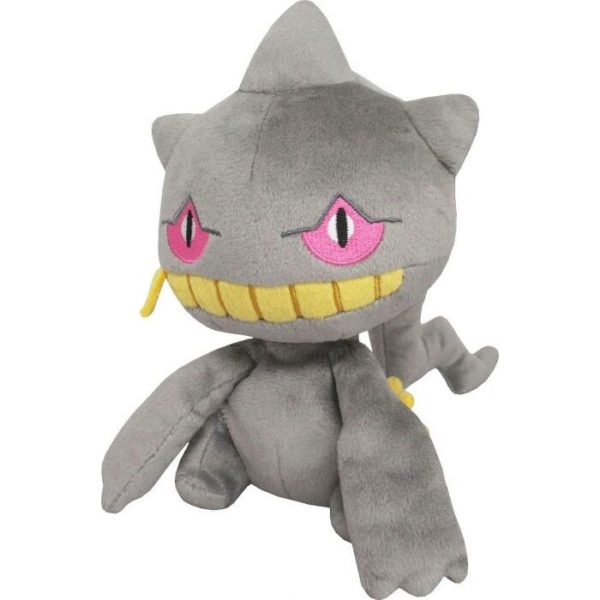 San-ei’s Pokémon All Star Collection plush series features a beautifully detailed version of Banette Some of the highest quality Pokémon plush on the market come from this lineup. Every plush is constructed out of super soft ‘minky’ fabric and weighted with beans to help them sit/pose.

Banette is a dark gray, doll-like Pokémon that is possessed by pure hatred. It has three short spikes on its head and a long zigzagging ribbon trailing off the back of its head. A zipper acts as its mouth, and it has purplish-pink eyes with slit pupils. Its long, flat arms have three-fingered hands, while its legs are short and stubby. It has a yellow, brush-like tail. Being driven to life by a powerful grudge, it keeps its life force safely in its body by the means of its zipped up mouth. If unzipped, it would lose its energy. It lays curses on others by using its body as a voodoo doll and sticking pins into itself. It lives in garbage dumps and dark alleys, where it searches for the person that threw it away before it became a Pokémon. It is said that treating it with enough care will satisfy its grudge and will turn it back into a stuffed toy. When it Mega Evolves, it is filled with so much power and vindictiveness it cannot help cursing its Trainer.