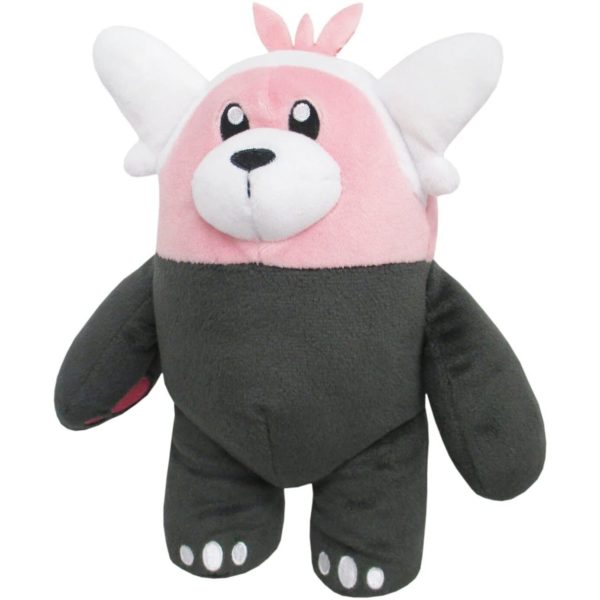 San-ei’s Pokémon All Star Collection plush series features a beautifully detailed version of Bewear! Some of the highest quality Pokémon plush on the market come from this lineup. Every plush is constructed out of super soft ‘minky’ fabric and weighted with beans to help them sit/pose.

Bewear is a black and pink Pokémon resembling a bipedal bear. Its legs and the front of its body are black, while its head, back, and tail are pink. Across the top of its head is a white band with two tufts of fur on each end. This white marking gives it the appearance of wearing a headband with decorative bear ears. It has a short, white muzzle with a triangular black nose and two small, black eyes. There are pink paw pads on its front paws consisting of the palm and three digital pads. The hind paws have three white digital pads on the front. It has a short tail with dark pink rings.

While Bewear may appear friendly, it is actually a very dangerous Pokémon — even considered to be the most dangerous Pokémon in Alola. It must never be approached carelessly, even if it is merely swinging its arms around in a friendly fashion as this is used as a warning. It shows affection with a fond embrace, but its hugs have incredible force. Trainers of this Pokémon must teach it how to restrain itself when showing affection. Its hugs are powerful enough to shattered bones. Many trainers are said to have left the world after receiving Bewear’s hugs. Bewear uses its arms to subdue its prey before before taking it back to its nest.