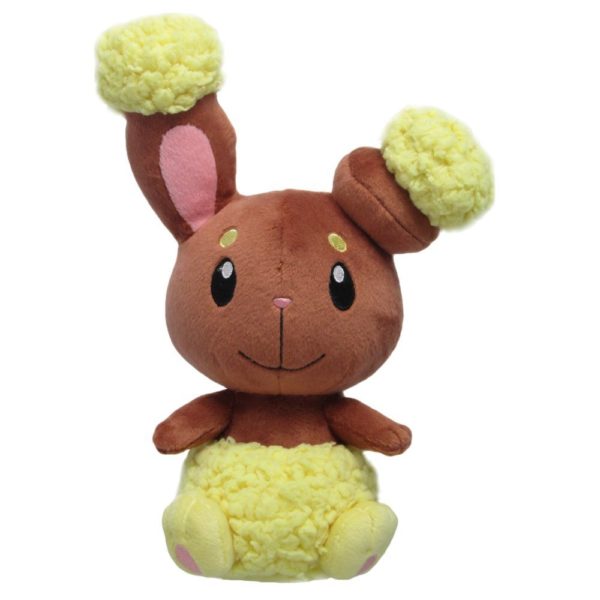 San-ei’s Pokémon All Star Collection plush series features a beautifully detailed version of Buneary! Some of the highest quality Pokémon plush on the market come from this lineup. Every plush is constructed out of super soft ‘minky’ fabric and weighted with beans to help them sit/pose.

Buneary is a small, bipedal, rabbit-like Pokémon with brown ears that can curl up. It has two types of fur covering its body: a light tan fleece that covers much of its lower body, feet, and the tips of its ears, and a smooth chocolate colored pelt on the upper half of its body. It has a small, triangular pink nose, pink paw pads on the undersides of its feet, and small tan spots above its eyes. It has a small brown puff of a tail.

If Buneary senses danger, it perks up both ears. It can also be a sign that Buneary needs care due to something wrong with its body and mind. It can deliver powerful blows with its curled up ears, and it has an impressive jumping ability. It can be usually seen with one rolled up ear to swiftly counterattack when needed. It can increase this attack’s power through training. On cold nights, Buneary sleeps with its head tucked into its fur. It lives in forests, though it can also be found on icy mountains. It is most likely herbivorous. Buneary also likes to eat certain kinds of flowers found in the wild.