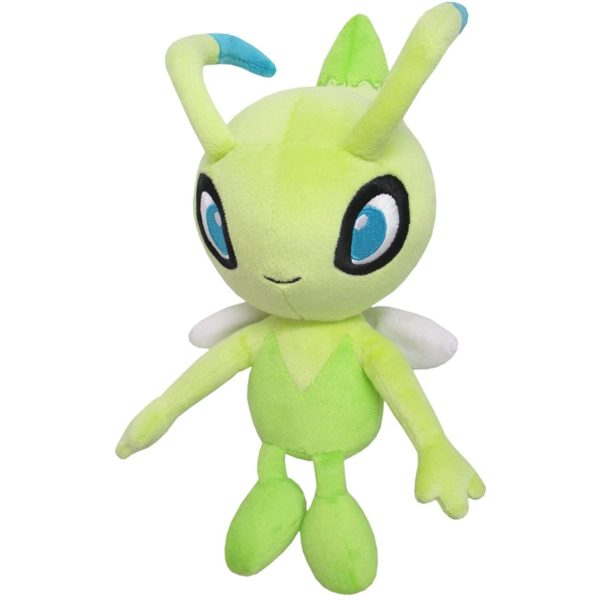 San-ei’s Pokémon All Star Collection plush series features a beautifully detailed version of Celebi! Some of the highest quality Pokémon plush on the market come from this lineup. Every plush is constructed out of super soft ‘minky’ fabric and weighted with beans to help them sit/pose.

Celebi is a green fairy-like creature. It has round toeless feet, three-fingered hands, and clear wings on its back. It has a round head that comes to a curved point. It has large baby-blue eyes with thick black rings around them, and a pair of green antennae with blue tips. Often found in forests, Celebi is a Mythical Pokémon, known in legend as the “Voice of the Forest.” It is able to travel through time and exist simultaneously throughout time, and plant life flourishes wherever it has been. As seen in the anime, it is able to bring deceased Celebi back to life and restore plants to perfect health. Celebi also has the ability to heal wounds. It was shown in Pokémon Colosseum that Celebi has the power to instantly cause the Purification of any Shadow Pokémon and can be summoned at Relic Forest with the melody of a Time Flute. Celebi is the only known Pokémon capable of learning Heal Bell.

Despite living in forests as its guardian, Celebi only shows itself in areas and times of peace. It has been regarded that as long as Celebi are seen throughout the world, a prosperous and bright future is still in store for the Pokémon world. As shown in the anime, it can sense if something is a temporal anomaly in their current timeline and will bring them back to their original timeline. Celebi has been referred to as a forest deity.