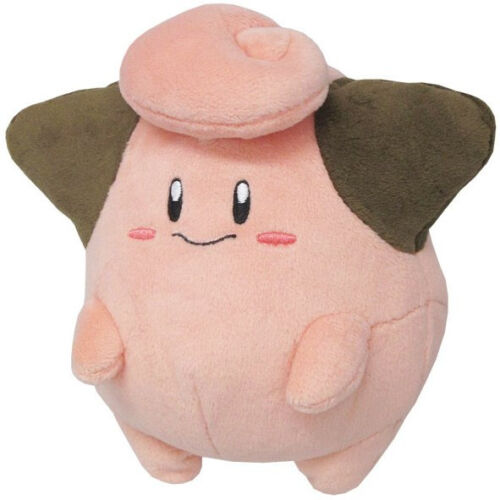 San-ei’s Pokémon All Star Collection plush series features a beautifully detailed version of Cleffa! Some of the highest quality Pokémon plush on the market come from this lineup. Every plush is constructed out of super soft ‘minky’ fabric and weighted with beans to help them sit/pose.

Cleffa is a small, pink creature that is vaguely star-shaped in appearance. Its ears are completely brown. It has two small black eyes, a small mouth, and it appears to have a small, permanent blush on its cheeks. It possesses stubby, digitless arms and legs, which come to a point. It has a curl on its forehead and a curled up tail. Cleffa lives in mountainous regions, typically found at meteor impact sites. Sightings of Cleffa become more likely during nights illuminated by shooting stars, where they dance the night away; this dance is said to bring good fortune to any who witness it. They quench their thirst the next morning by drinking dew. It is fascinated by anything resembling stars and meteors, such as Minior.