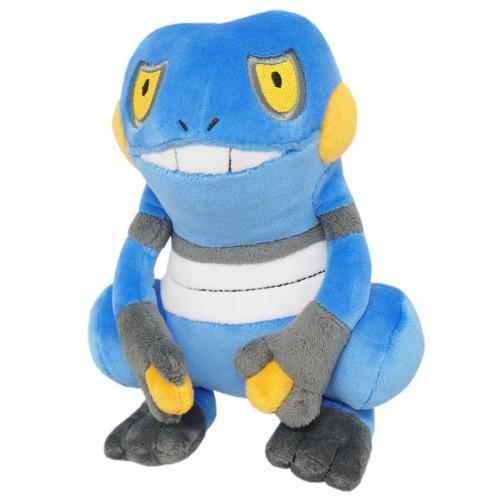 San-ei’s Pokémon All Star Collection plush series features a beautifully detailed version of Croagunk! Some of the highest quality Pokémon plush on the market come from this lineup. Every plush is constructed out of super soft ‘minky’ fabric and weighted with beans to help them sit/pose

Croagunk is a dark blue, bipedal Pokémon that resembles a poison dart frog. It has yellow eyes, which are surrounded by black markings. There are orange, expandable pouches on its cheeks, and its teeth are wide and flat. A black marking encircles its upper arms and chest, and there are white bands around its chest. The white markings are slightly higher up on the female Croagunk than the male. It has three fingers and toes, most of which are black. The only digits that are not black are its center fingers, which are orange instead.