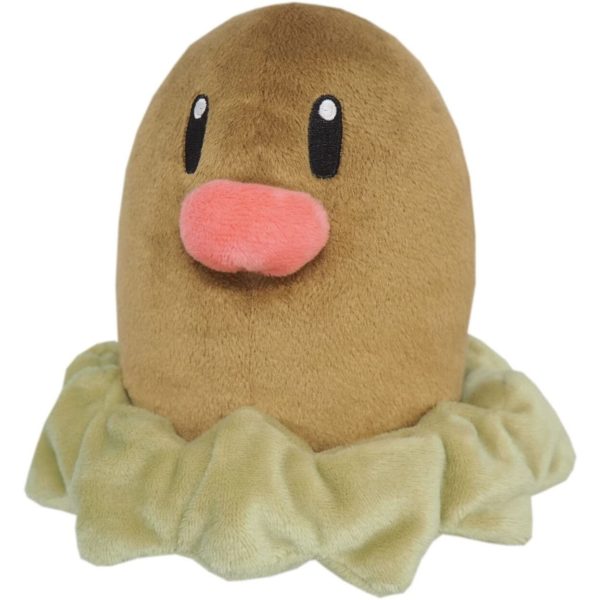 San-ei’s Pokémon All Star Collection plush series features a beautifully detailed version of Diglett! Some of the highest quality Pokémon plush on the market come from this lineup. Every plush is constructed out of super soft ‘minky’ fabric and weighted with beans to help them sit/pose.

Diglett is a tiny, brown Pokémon that seems to be perpetually buried within the earth, leaving only its head visible. Its small stature makes it both the lightest and shortest Ground-type. It has beady black eyes and a large, round, pink nose. A Diglett in Pokémon Mystery Dungeon: Red Rescue Team and Blue Rescue Team mentions that it has feet, though their size and appearance are unknown. It spends much of its time underground and has very thin skin. If Diglett is exposed to sunlight, its blood will heat up and cause it to grow weak.

Diglett lives in tunnels and caves under the earth, where it feeds on tree roots and vegetables. It also sometimes lives in burrows near forests and has even been shown to live inside of trees. Diglett digs regularly through the earth at a shallow depth, leaving perfectly tilled soil in its wake. Some farmers welcome Diglett because it tills their fields and its droppings enrich the soil, but others consider it a pest for eating their vegetables. For a brief time, Fissure was its signature move. Druddigon is a natural predator of Diglett.