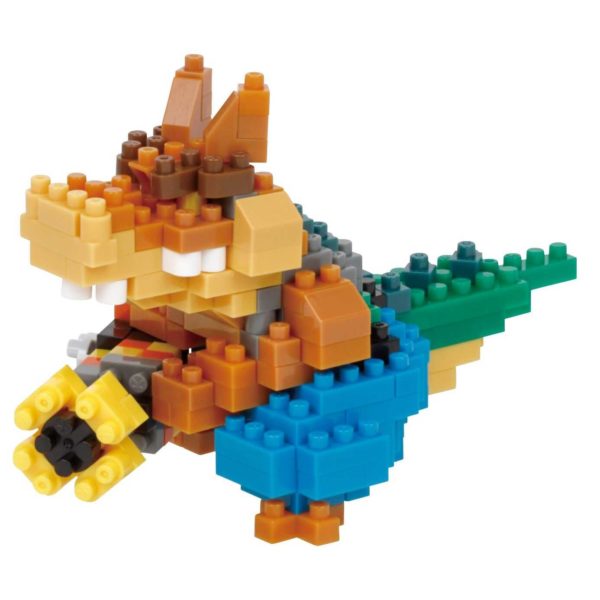 WOAH! The PlayStation classic is here in building form with Dingodile from nanoblock’s Crash Bandicoot Character Series. This nanoblock stands approximately 2.3 inches tall and has 210 pieces. This kit features all the details one would expect and is fun and easy to build!

Dingodile is a genetically enhanced hybrid of a dingo and a crocodile, having a crocodile’s body and tail, and characteristics of a dingo with an Australian accent. He makes his first appearance in Crash Bandicoot: Warped, after which he makes regular appearances in the series, with his latest appearance being the Nitro-Fueled remake of Crash Team Racing. Out of all of Cortex’s animal minions, Dingodile has made the second most appearances in the series, only Tiny Tiger has appeared more.

Dingodile is often equipped with a flamethrower, which is fueled by a large gas tank worn on his back. The flamethrower is occasionally traded for a water gun in some games, like the DS version of Crash of the Titans. He is also known to attack with his tail. It is generally assumed that Dingodile was created by Doctor Neo Cortex, but Dingodile has been known to work independently, or even against Cortex from time to time.