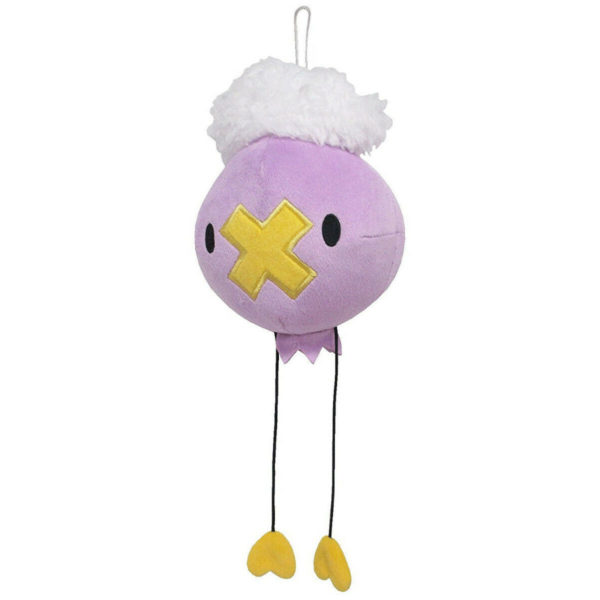 San-ei’s Pokémon All Star Collection plush series features a beautifully detailed version of Drifloon! Some of the highest quality Pokémon plush on the market come from this lineup. Every plush is constructed out of super soft ‘minky’ fabric and weighted with beans to help them sit/pose.

Drifloon has a spherical, purple body with two stringy arms that have yellow, heart-shaped hands on the ends of them. At the base of its body is a frayed protrusion that resembles the tied end of a balloon. In the very center of its body is a yellow tape-like “X”, which contains its small mouth in the very center. Located on either side of the “X” are its small, black eyes. A white mass of fluff that resembles a cloud sits on top of Drifloon’s head.

Driifloon are created from many souls gathering together. Due to its aimless drifting, this species is known as “Signpost for Wandering Spirits”. Drifloon seeks out children due to it desiring company. It has been known to steal children that mistake it for a regular balloon. However it dislikes stealing heavy children. Drifloon’s round body expands from the souls it collects. When the body explodes, the soul unleashes a screeching sound. However, due to its light weight, it can be resisted easily and is often pulled around. This results in Drifloon running away from any children that is rough with it. Although created by lost spirits of Pokémon and people, as seen in the anime, it can be friendly and helpful. It prefers to reside in damp, humid locations and can expand or shrink to express its feelings.