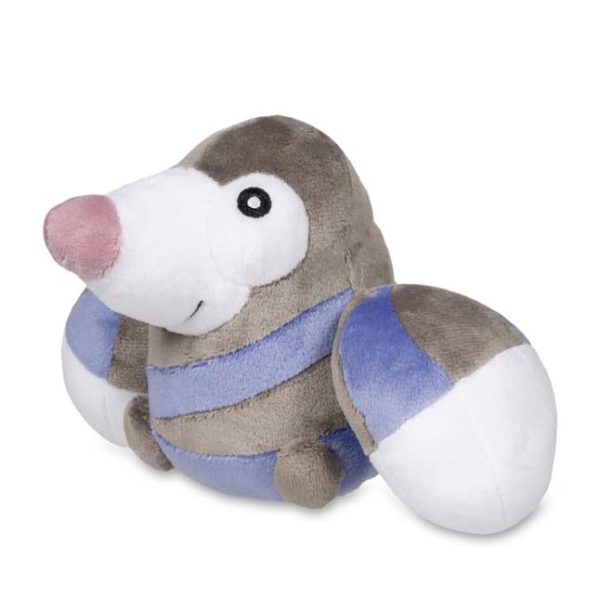 This authentic plush of Drilbur is a part of the imported Japanese Pokemon Center Black & White lineup, officially licensed by Nintendo, and managed by the Pokémon Company International! Pokemon Center plush always use high-quality soft fabrics and place careful attention to detail for accurate scaling and dimensions.

Pokémon Center merchandise focuses on unique designs and high quality products for all ages. Pokémon launched in Japan in 1996 and today is one of the most popular children’s entertainment properties in the world. Pokemon Center plush always use high-quality soft fabrics and place careful attention to detail for accurate scaling and dimensions.

Drilbur has a short, wide body with two small, ovoid feet with three toes each. Its body is mostly black, but has a jagged, navy blue stripe that runs diagonally around its torso from its left shoulder. It is connected at the bottom to another stripe, which extends around the base of its torso. It has a white face with a long snout, tipped by its pink nose. Its eyes are at the base of its nose on either side. Drilbur’s arms are wide and thin with a blue spot on its palms. It lacks traditional hands, as its arms form directly into its three, extremely large claws. It has a very small, stubby tail.

Drilbur can straighten its body and align its claws forward, allowing it to spin like a drill and dig through the ground. It is able to dig at speeds of up to 30 mph (50 km/h). As seen in both the manga and the anime, Drilbur has no issues being around humans, and can be very friendly. Many farmers dislike Dribur due to it causing destruction to their vegetable crops.

Pokémon Center is inspired by the Pokémon video game, where Pokémon Centers are important destinations that help Trainers on their journey. In that tradition, physical Pokémon Centers were first introduced in Japan by The Pokémon Company and continues to thrive in a new online form at PokemonCenter.com.

More than a dozen physical Pokémon Centers serve Pokémon fans in Japan. These Pokémon Centers are a nation-wide retail chain that offers a wide range of Pokémon products in major Japanese cities and central transit hubs.