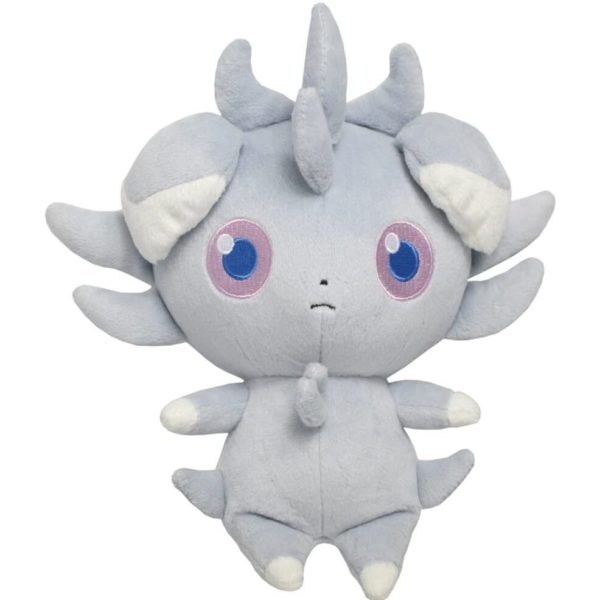 San-ei’s Pokémon All Star Collection plush series features a beautifully detailed version of Espurr! Some of the highest quality Pokémon plush on the market come from this lineup. Every plush is constructed out of super soft ‘minky’ fabric and weighted with beans to help them sit/pose.

Espurr is a bipedal, feline Pokémon. Its fur is a pale gray with white tips on its ears and white paws. There are tousled tufts of fur on its head, cheeks, shoulders, chest, and hips. It has wide, pale purple eyes with darker purple pupils, a tiny nose, and a small mouth. When its mouth is open, two pointed teeth can be seen on its upper jaw. Its tail is fluffy and slightly curled. Espurr’s ears are quite large in proportion to its body and folded. Beneath its ears are two ring-shaped yellow organs. These organs emit Espurr’s intense psychic powers. It has no control over its power, and it would leak out if the ears were not sheltering the organs. It has enough psychic energy to create a blast radius of 300 feet (90 meters). This psychic energy can send even a wrestler flying.