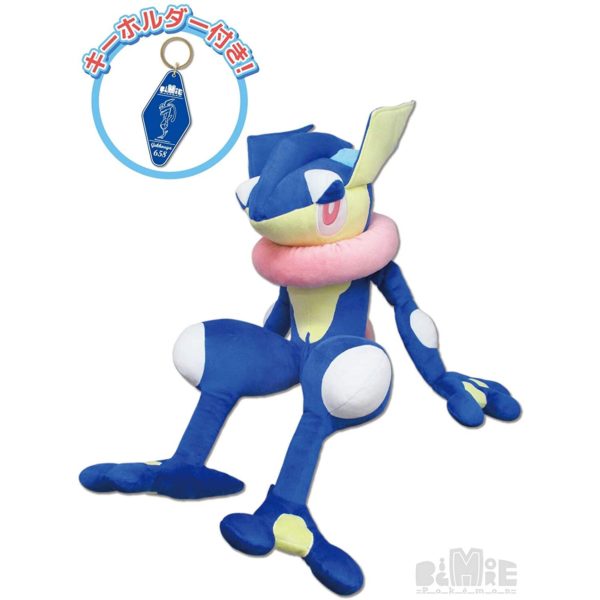 San-ei’s Pokémon BigMore! series features a huge and beautifully detailed version of Greninja! This premium series offers your favorite Pokémon in a big size while still maintaining strict attention to quality to give the real-life feeling of your chosen partner. Own just one and it’ll make you wanna catch ’em all! Each BigMore! plush includes a matching acrylic keychain.

Greninja is a bipedal, frog-like Pokémon. It is mostly dark blue with a yellow chest, a white triangular marking over each eye, a light blue four-pointed star on each thigh, and yellow on the lower half of its face. It has red eyes with white pupils and its mouth is hidden behind a large, pink tongue that wraps around its neck and extends outward behind its head. Running down the middle of its head is a fin-like extension, and there is a similar fin on each side of its head. Light blue webbing connects its head fins. There is a large, white bubble-like bump on each elbow and knee. Its back feet have two toes, while its front feet have three toes. Each digit has a bulbous tip and yellow webbing. Greninja moves with the speed and grace of a ninja. It uses swift movements to confuse its enemies while it slices them up with throwing stars made of compressed water. These throwing stars are sharp enough to split metal.