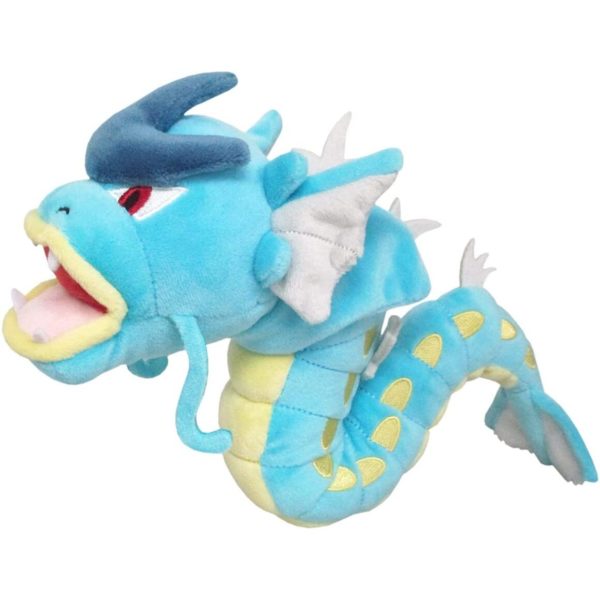 San-ei’s Pokémon All Star Collection plush series features a beautifully detailed version of Gyarados! Some of the highest quality Pokémon plush on the market come from this lineup. Every plush is constructed out of super soft ‘minky’ fabric and weighted with beans to help them sit/pose.

Gyarados is a serpentine Pokémon with a long body covered in slightly overlapping scales. It is mostly blue with a yellow underbelly and a row of yellow spots down each side. Its mouth is very large and gaping, bearing four pointed teeth and yellow lips. It has one barbel and a small white fin on each side of its face. The barbels are white on a female and tan on a male. It has small, red eyes, a three-pointed, dark blue crest on its head, and four white, spiky dorsal fins. Gyarados’s tail fin is similar in structure to the crest on its head, except with a thin, white fin spread between the points.

The process of evolution causes a change in its brain structure that is believed to cause its violent nature. Gyarados’s fangs can crush stones and its scales are harder than steel. Gyarados is feared for its fierce temper and wanton destructive tendencies. It appears in times of conflict and destroys the surrounding area. Its rampages have been known to last a month at a time. Gyarados lives in both fresh and salty waters. Both Gyarados and its Mega form have demonstrated in the anime that it can leap huge distances both from the water and from the ground, usually several times its own body length. However, Gyarados is rarely seen in the wild.