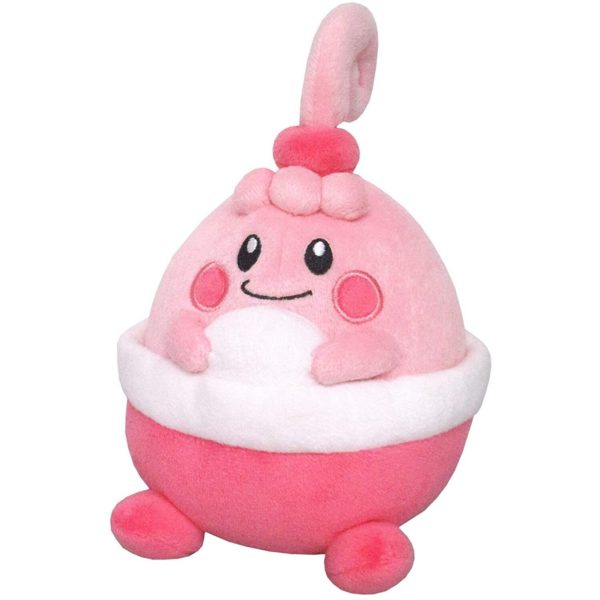 San-ei’s Pokémon All Star Collection plush series features a beautifully detailed version of Happiny! Some of the highest quality Pokémon plush on the market come from this lineup. Every plush is constructed out of super soft ‘minky’ fabric and weighted with beans to help them sit/pose.

Happiny is a small Pokémon that is shaped like an egg. It has a soft, smooth, light pink body. On top of its head is a curly outgrowth that resembles a ponytail, with a dark pink band around the base. The appearance of this curly growth of hair often annoys Happiny. It has three round bumps on its forehead, and two pink circles on its cheeks. There is a pouch around the lower half of its body, which resembles a diaper. The pouch is red with a white stripe around the top.

Happiny’s pouch is rubbery and flexible, enabling the Happiny to put things into it with ease. As it cannot produce Eggs yet, it makes up for it by carrying a white, Egg-shaped stone in its pouch to imitate Chansey and Blissey. Happiny highly treasure the stone it holds in pouch. It may give this stone to people whom it likes, and it has a habit of wandering around people’s feet and causing them to stumble. However, it can throw a tantrum and cry should the stone not be returned to it.