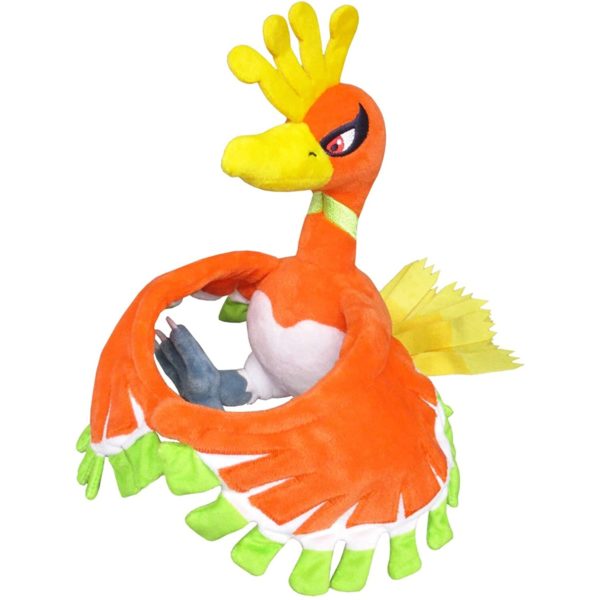 San-ei’s Pokémon All Star Collection plush series features a beautifully detailed version of Ho-Oh! Some of the highest quality Pokémon plush on the market come from this lineup. Every plush is constructed out of super soft ‘minky’ fabric and weighted with beans to help them sit/pose.

Ho-Oh is an avian Pokémon resembling a phoenix and a peacock. Its feathers are predominantly gold and red, with yellow tail-feathers, a white underside, and green feathers at the tip of its wings. Ho-Oh has a green stripe on its neck, a yellow beak, black rings around its red eyes, and a feathered, yellow crest on its head. Ho-Oh’s wings are prismatic, causing it to trail a rainbow behind it. It has darkly colored feet and legs with four toes and long talons.

Ho-Oh has a mythical power to resurrect the dead. Ho-Oh was the only known Pokémon to learn Sacred Fire, its former signature move. It is said that when it flies its huge wings create bright, colorful rainbows. The rare few who bear witness to Ho-Oh are promised an eternal happiness. Ho-Oh used to perch at the top of the Bell Tower until the Brass Tower was destroyed by fire. It now presumably flies through the world’s skies in search of a Trainer with a pure heart.