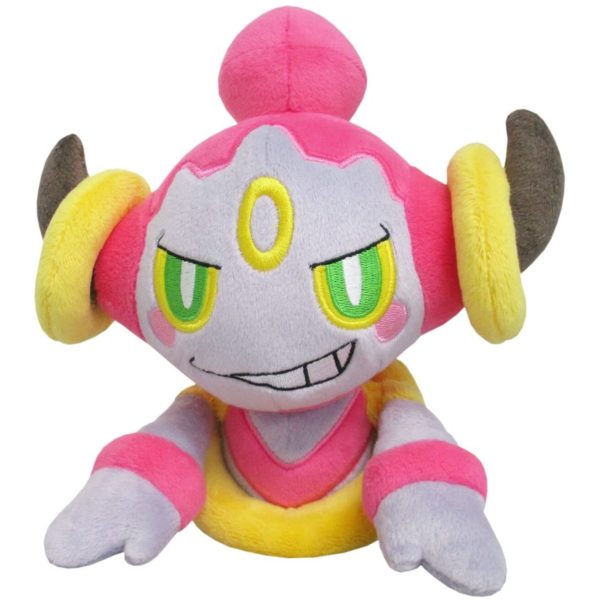 San-ei’s Pokémon All Star Collection plush series features a beautifully detailed version of Hoopa (Confined)! Some of the highest quality Pokémon plush on the market come from this lineup. Every plush is constructed out of super soft ‘minky’ fabric and weighted with beans to help them sit/pose.

Hoopa Confined is a light purple Pokémon with a vaguely humanoid appearance. It has green eyes with yellow sclerae, a yellow ring marking on its forehead, a small, pink dot under each eye, and dark pink hair tied into a short ponytail. On either side of its head is a dark gray horn that curves slightly upward. Its body has a dark pink, V-shaped marking on the chest and a small, golden spike on each shoulder. Its arms are not attached to its body and instead float next to it; each arm has a small golden spike similar to those on its shoulders. It has mitten-like hands and dark pink rings around each wrist. In place of legs, it has a wispy tail. Hoopa has three gold rings: one large one around its lower body and one hanging freely on each of its horns.

The rings on Hoopa’s body can warp space and allow it transport items by passing them through its hoop. Hoopa Unbound is said to be Hoopa’s true form and is said to have the power to bend dimensions. This allows it to seize anything in the world. As seen in the anime, either form can travel through its rings and Hoopa Unbound has the ability to control and summon powerful Legendary Pokémon. Hoopa Confined is the only known Pokémon that can learn Hyperspace Hole, while Hoopa Unbound has its own signature move, Hyperspace Fury.