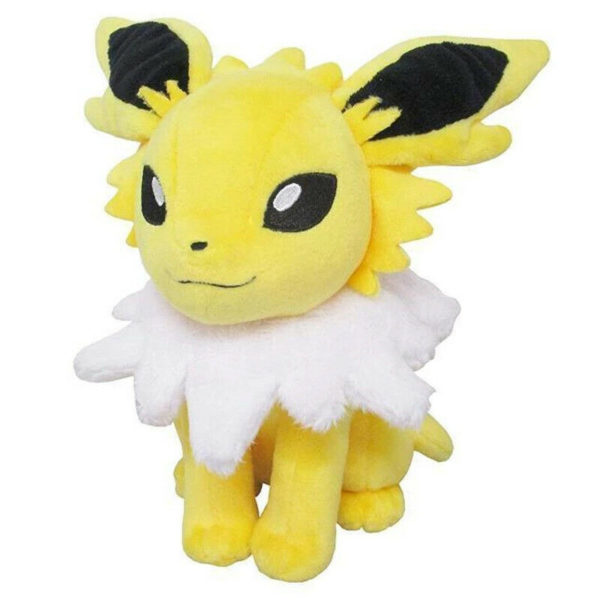 San-ei’s Pokémon All Star Collection plush series features a beautifully detailed version of Jolteon! Some of the highest quality Pokémon plush on the market come from this lineup. Every plush is constructed out of super soft ‘minky’ fabric and weighted with beans to help them sit/pose.

Jolteon is a quadruped, mammalian Pokémon. It is covered in yellow fur with a spiky fringe around its tail and a white ruff around its neck. Its ears are large and pointed with black interiors, and its eyes and small nose are black. It has slender legs and small paws, each with three toes and a pink paw pad. Jolteon’s prickly fur is made of electrically charged needles and generates negatively charged ions, which create a sparking noise as it moves. It also has an electricity generating organ in its lungs. The static electricity in its fur amplifies the low-level electricity generated by its cells and allow it to discharge 10,000-volt lightning bolts. This Pokémon is most often found in cities and towns under the ownership of Trainers. However, its high-strung nature and tendency toward mood swings can make it difficult to train.