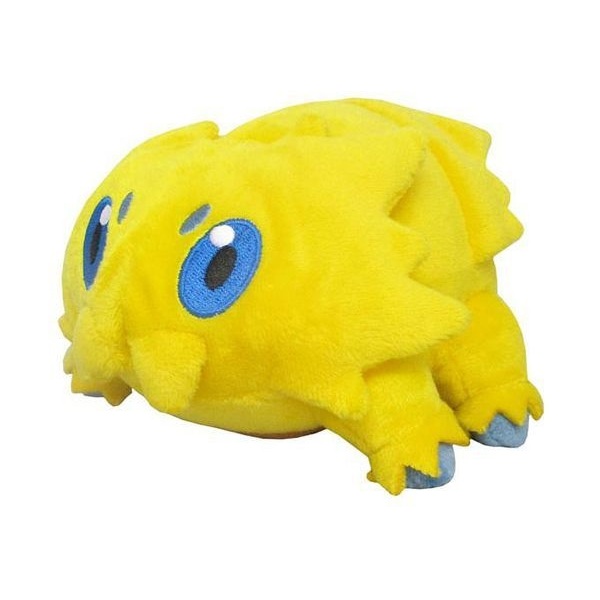 San-ei’s Pokémon All Star Collection plush series features a beautifully detailed version of Joltik! Some of the highest quality Pokémon plush on the market come from this lineup. Every plush is constructed out of super soft ‘minky’ fabric and weighted with beans to help them sit/pose.

At 4 inches (0.1 meters) tall, Joltik is one of the smallest Pokémon in existence. It has four legs tipped with blue, conical feet. Its ovoid body is completely covered in yellow fur, with notable tufts sticking out on each side of its face, just over each eye, and its lower back. Joltik has four blue eyes. The two larger eyes are set relatively far apart on its face, containing black pupils. The two smaller simple eyes are situated between the first pair, slightly higher up on its face. Joltik’s mandibles point downward and reside at the bottom of its face, where they closely resemble tufts of hair. Joltik is too small to generate its own electricity, so it attaches itself to larger Pokémon and feeds off their static electricity. More than often it prefers sticking on Yamper’s hindquarters. It will also make its way into houses and feed off electricity in electrical sockets. All of the energy it absorbs it stores in an electric pouch on its body. As seen in the anime, Joltik is not especially aggressive, but will defend itself if bothered. It has been demonstrated that if Joltik is unable to find a source of energy, it will be unable to move and in serious danger. Joltik, and its evolution Galvantula, are the only Pokémon that can learn Electroweb by leveling up.