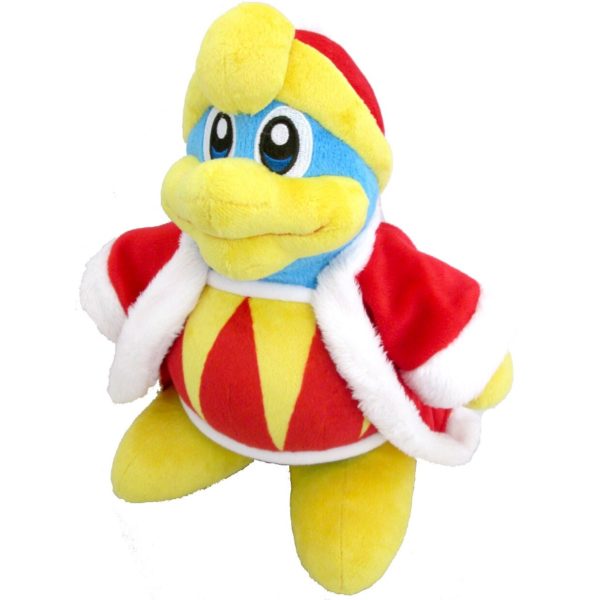 San-ei’s Kirby All Star Collection plush series features a beautifully detailed version of King Dedede! Some of the highest-quality officially licensed Nintendo plush on the market come from this lineup. Every Kirby 25th Anniversary plush uses warm pastel colors, constructed out of soft ‘wooly’ fabric, and weighted with beans to help them sit/pose.

Although the name “Little Buddy” may be printed on the tags of some of these plush, they’re just a distributor. They are in fact manufactured by San-ei which is a Japanese officially licensed Nintendo merchandise brand that makes extremely high quality plush with soft fabrics and beans to help them sit/pose. These plush collectibles are not only a big hit in Japan, they are also a favorite and a great collectible for any fan of some of the biggest Nintendo franchises across the globe.  The beautiful details and incredibly soft-to-the-touch feel will bring out the most of your favorite characters.

King Dedede is Kirby’s arch-rival in Nintendo and HAL Laboratory’s long-running Kirby video game series. He (or something in his likeness) has appeared in every game in the series except Kirby & The Amazing Mirror. As such, he is the most recurring major character of the series besides Kirby and Waddle Dee. Due to his portrayal in various games in a villainous matter, many consider King Dedede to be the main antagonist of the series. However, Nintendo has described Dedede as Kirby’s “arch-frenemy,” as he has helped more than harmed since Kirby’s Return to Dream Land, which makes it debatable whether or not Dedede is the main (or even an) antagonist any longer.