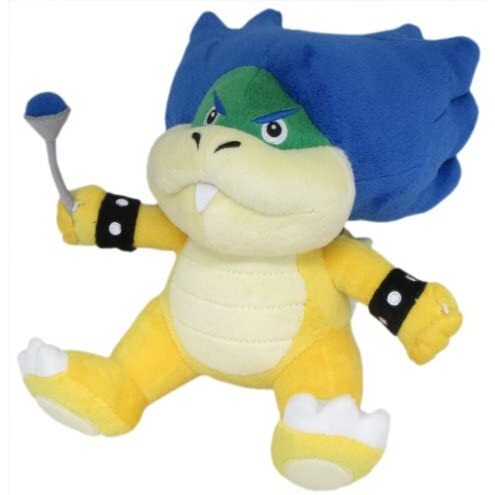 San-ei’s All Star Collection plush series features a beautifully detailed version of Ludwig Von Koopa! Some of the highest-quality officially licensed Nintendo plush on the market come from this lineup. Every plush is constructed out of super soft ‘minky’ fabric and weighted with beans to help them sit/pose.

Ludwig von Koopa (known as Kooky von Koopa in the cartoons) is the oldest of the Koopalings, a clan of seven siblings that act as leaders of the Koopa Troop under Bowser (originally considered his children). He is also their self-proclaimed leader, and is hinted in Mario & Luigi: Bowser’s Inside Story + Bowser Jr.’s Journey to be of a high enough rank to directly receive orders from and give status reports to Bowser. As shown since the Super Mario Picture Books, Ludwig is a conceited show-off, with the recent official bios also underlining his intelligence. In terms of physical appearance, his most notable traits are his large, wild, blue hair, his overbite on the upper snout and his eyebrows that are kept at a peculiar angle, conferring a serious, mature look. He resembles and was named after composer Ludwig van Beethoven.