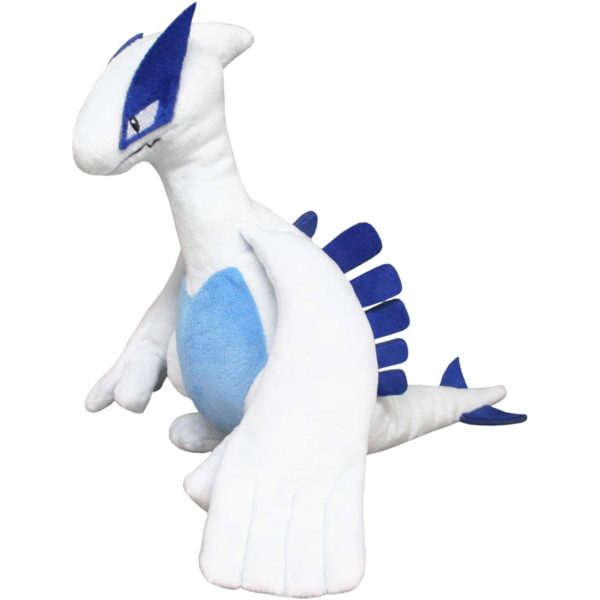 San-ei’s Pokémon All Star Collection plush series features a beautifully detailed version of Lugia! Some of the highest quality Pokémon plush on the market come from this lineup. Every plush is constructed out of super soft ‘minky’ fabric and weighted with beans to help them sit/pose.

Lugia is a large Pokémon that resembles a dragon, a plesiosaur, and a bird. It is primarily pale silver-white, but it has blue undersides with slightly varying tones. It has a ridged mouth similar to a beak, although it has pointed teeth on its lower jaw. Its head has a point to the back, and Lugia’s eyes have pointed blue or black spikes on them. Lugia has a long, slender neck and a smooth, streamlined body. Dark blue or black plate-like protrusions run down the length of its back, and there are two smaller, more pointed ones on the end of its tail. It can fold back these plates to increase its speed. Lugia is covered in many scales that protect it from attacks. It has large wings that resemble hands. Though it is genderless, a young Lugia has been observed, suggesting there is a breeding population. Lugia has been shown to be fiercely protective of its young.

Lugia leads the legendary birds. When they fight over territory, Lugia is the only Pokémon that can quell their ceaseless fighting, as observed in the second Pokémon movie. Much like the birds, it possesses the ability to control the weather; most notably, it can calm and give rise to storms. It is said that a light flutter of its wings is capable of causing winds powerful enough to tear down cliffs. If it were to flap its wings, it could hypothetically spawn storms lasting as long as 40 days. It is highly intelligent, and because of the devastating power it could accidentally inflict, it isolates itself deep underwater and tends to sleep in solitude. Lugia is the only known Pokémon that learns Aeroblast. It is extremely rare and is hardly ever seen.