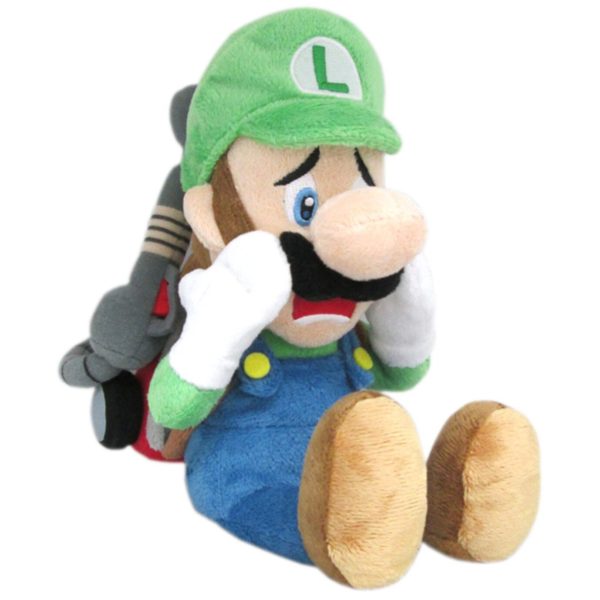 San-ei’s Luigi’s Mansion plush series features a beautifully detailed version of scared Luigi with Strobulb! Some of the highest-quality officially licensed Nintendo plush on the market come from this lineup. Every plush is constructed out of super soft ‘minky’ fabric and weighted with beans to help them sit/pose.

The Strobulb is a flashlight tool which appears in Luigi’s Mansion: Dark Moon. The Strobulb is required to stun some Ghosts as, unlike in the first game, shining light via flashlight is no longer sufficient to stun all ghosts in the game. Players need to charge up the Strobulb and unleash a powerful beam of light. The longer the charge, the greater the range. A fully charged flash will allow the player to stun multiple ghosts at once than an ordinary flash. Some ghosts wear sunglasses to protect them from the light; these sunglasses must be removed with the Poltergust 5000 before the flashlight or Strobulb is used. When charging the Strobulb, the actual light coming from the flashlight decreases as it starts charging, and while it is fully charged, a small circle is seen at the source. Unleashing it creates a powerful beam of light, with small light particles at the end of the flash.