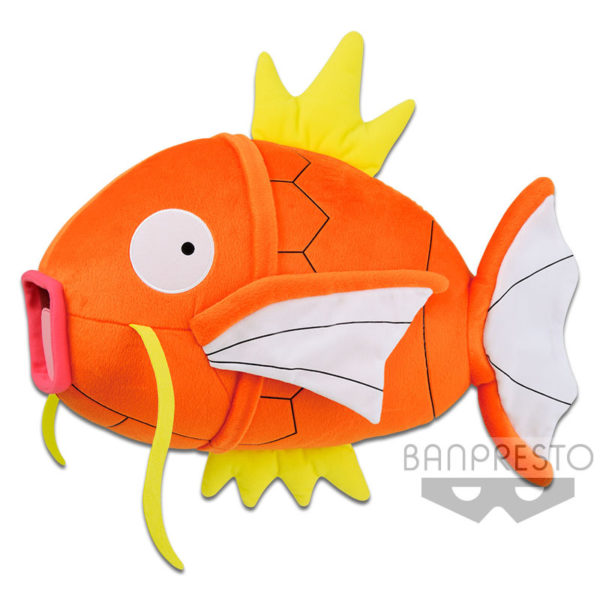 Magikarp gets a jumbo-sized new addition to the popular Look at the Tail! plush lineup by Banpresto!

The Look at the Tail! lineup by Banpresto typically depicts your favorite Pokemon posed in a variety of ways to bring the Pokemon’s tail to the center of attention. These poses usually have the Pokemon hold its tail, position its body to bring its tail forward, or even point their eyes/limbs to its tail. The term “mecha dekai” means “ very large” in Japanese.

Magikarp is a fish Pokémon with large, heavy reddish-orange scales. It has large, vacant eyes and pink lips. Its pectoral and tail fins are white. On its back is stiff, three-peaked yellow fin; there is an identical fin on its underside. It also has long barbels. The barbels are white on a female and pale-yellow on a male. A long-lived Magikarp is able to utilize its immense splashing power to leap high enough to scale mountains. It also has a strong enough immune system to survive in the most polluted of waters. However, it is usually overlooked by Trainers because of its perceived weakness: even in the heat of battle, it will do nothing but flop around. It is believed that the ancestors of Magikarp were actually much stronger than modern Magikarp, and this led scientists to research this species. Magikarp is found in many bodies of water, such as lakes, rivers, and ponds. However, due to its weak swimming ability it usually lives downstream of the water’s flow. It is normally seen using its former signature move, Splash, to leap out of the water, which makes it an easy target for predators such as Pidgeotto and Pidgeot.