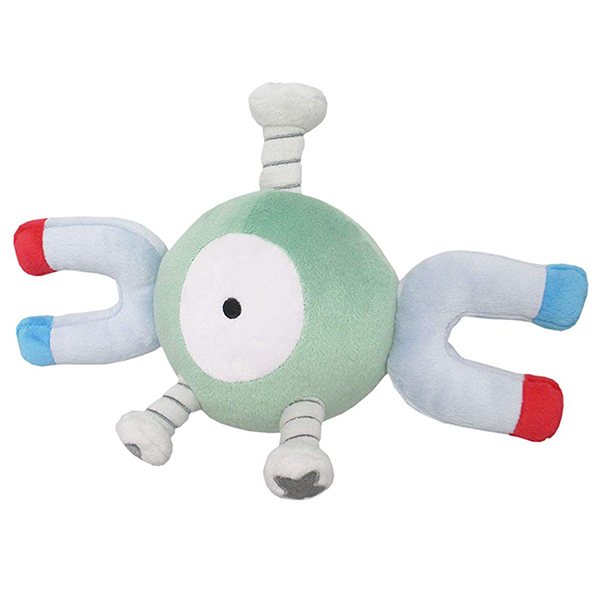 San-ei’s Pokémon All Star Collection plush series features a beautifully detailed version of Magnemite! Some of the highest quality Pokémon plush on the market come from this lineup. Every plush is constructed out of super soft ‘minky’ fabric and weighted with beans to help them sit/pose.

Magnemite is a seemingly robotic Pokémon that has a gray, spherical metal body with blue-and-red tipped horseshoe magnets on each side and a single, large eye. It has three Phillips head screws on its body: two near the bottom of its body and the one on top of its head that looks similar to an antenna. The two bottom screws serve no noticeable purpose, although they may be its feet as the Pokédex identifies a footprint similar to that of the screw’s head. Even though Magnemite and its evolved forms are mechanical creatures, the anime has shown that it has emotions and a way of reproducing. It has even exhibited the need to eat, although its main form of nutrients is electrical currents. It is commonly found in locations such as power plants or caves with a strong magnetic field. Despite its modern, artificial appearance, Magnemite has been depicted in carvings discovered at the Ruins of Alph and has been present in AZ’s retelling of the Kalos war, indicating it has existed for at least 3,000 years.