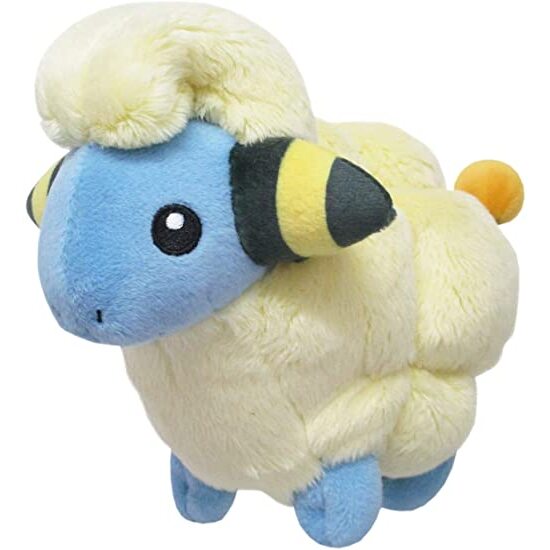 San-ei’s Pokémon All Star Collection plush series features a beautifully detailed version of Mareep! Some of the highest quality Pokémon plush on the market come from this lineup. Every plush is constructed out of super soft ‘minky’ fabric and weighted with beans to help them sit/pose.

Mareep is a sheep-like Pokémon with fluffy cream-colored wool covering its entire body, as well as a curly tuft of wool in the middle of its head. Its head is blue, and it has black eyes. Its four feet are blue and have two digits on each foot, and it appears to be on tiptoe at all times. Its conical ears and tail have a yellow-and-black striped pattern. Mareep has an orange sphere at the end of its tail, which acts like a small light bulb. This sphere glows brighter the more electricity it has. Mareep’s wool, which grows continuously, stores electricity, rubbing together and building a static charge. Its volume increases when it builds up with electricity. Touching the wool when it is charged will result in a static shock.