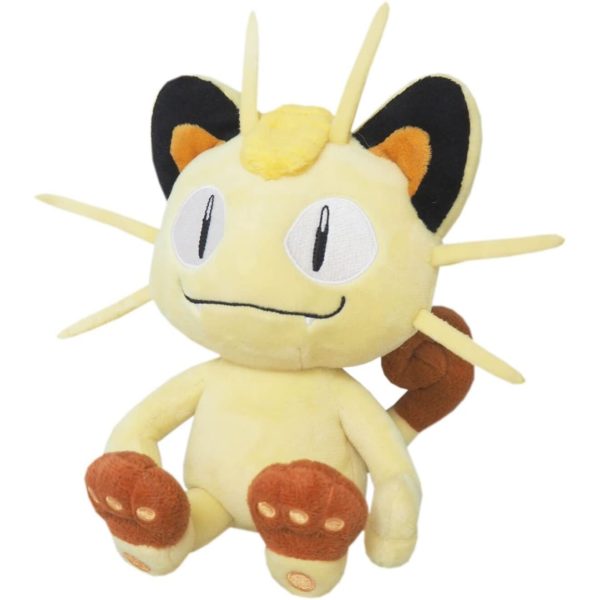 San-ei’s Pokémon All Star Collection plush series features a beautifully detailed version of Meowth! Some of the highest quality Pokémon plush on the market come from this lineup. Every plush is constructed out of super soft ‘minky’ fabric and weighted with beans to help them sit/pose.

Meowth is a small, feline Pokémon with cream-colored fur that turns brown at the tips of its hind paws and tail. Its ovoid head features four prominent whiskers, wide eyes with slit pupils, two pointed teeth in the upper jaw, and a gold koban coin embedded in its forehead. Its ears are black with brown interiors and are flanked with an additional pair of long whiskers. Meowth is a quadruped with the ability to walk on its hind legs; while the games always depict Meowth on two legs, the anime states that Meowth normally walks on all fours. It can freely manipulate its claws, retracting them when it wants to move silently. The tip of its tail curls tightly.

Meowth is attracted to round and shiny objects and has the unique ability to produce coins using Pay Day. Being nocturnal, it is known to wander about city streets at night and pick up anything that sparkles, including loose change. Upon finding a sparkling object, its eyes will glitter and the coin on its forehead will shine brightly.