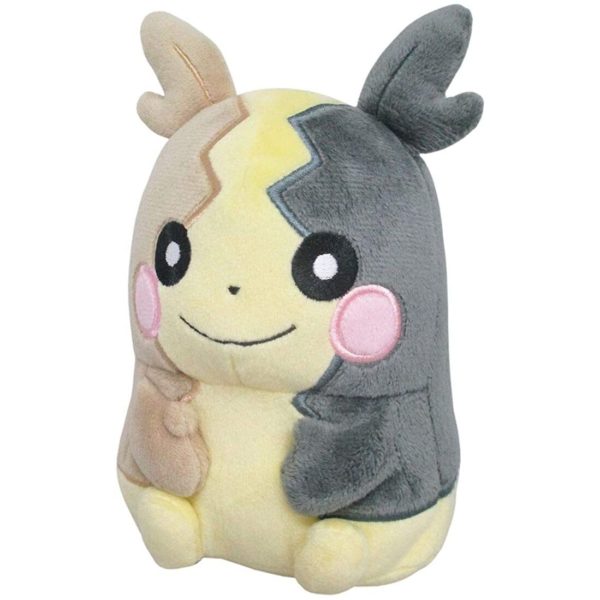 San-ei’s Pokémon All Star Collection plush series features a beautifully detailed version of Morpeko in Full Belly Mode! Some of the highest quality Pokémon plush on the market come from this lineup. Every plush is constructed out of super soft ‘minky’ fabric and weighted with beans to help them sit/pose.

Morpeko is a short, chubby rodent Pokémon who can change forms via its Hunger Switch Ability, which alters its appearance. The features shared between the two forms are short, stubby arms and feet, a pair of pink circular cheek pouches, a very tiny nose, two almond-shaped ears with a single fur tuft under each, and a primary body color separating two areas of fur which cover the arms, ears, cheeks, and eyes, and zigzag inward towards its face, stopping at the waist line. These fur patches form pockets in which it is seen storing seeds. In its Full Belly mode, its body is a creamy yellow in color, its eyes are circular and black with large white pupils, the fur on the left side of its body is black, and on the right side, it is brown. A single bucktooth can be seen protruding from its smiling mouth. While in its Hangry Mode, Morpeko’s primary body color turns purple, its eyes become downward-slanting red semi-circles, and the right-hand patch of fur turns from brown to black so that it matches the other side. Its mouth is also constantly formed into an angry snarl.