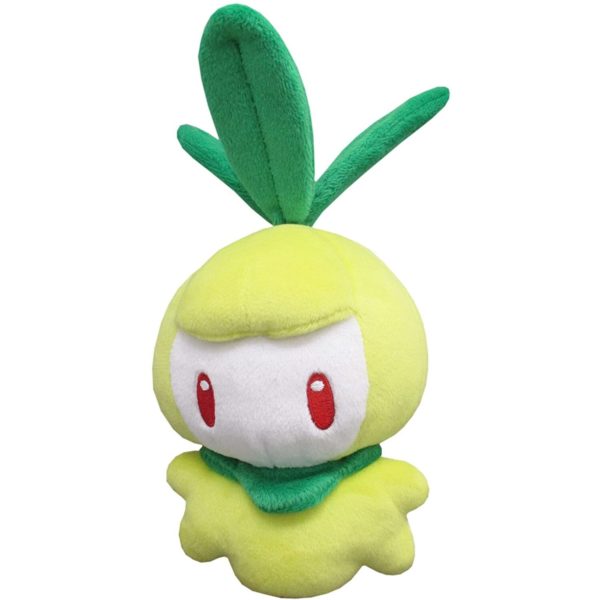 San-ei’s Pokémon All Star Collection plush series features a beautifully detailed version of Petilil! Some of the highest quality Pokémon plush on the market come from this lineup. Every plush is constructed out of super soft ‘minky’ fabric and weighted with beans to help them sit/pose.

Petilil is a plant-like Pokémon that resembles a plant bulb, such as an onion. It is primarily light green. Its head is tipped with three oblong leaves that are very bitter, which can cause dizziness. However, these leaves possess revitalizing effects such as restoring a person’s vigor. The leaves can also be boiled down into a liquid and used as bug repellent. The leaves’ color can also determine how healthy a Petilil is. Its crescent-shaped white face, seemingly lacking of a nose or mouth, has brown eyes shaped like elongated ovals. A green “bib” is present on its neck, and its lower body consists of five stubs, two of which act as arms, and two more act as legs.

Petilil is very popular with the elderly due to its vigor-restoring leaves. Petilil tends to appear near sources of clean waters. It lives in areas with soil abundant in moisture and nutrients. The homes can be either well-tended fields or flowerbeds. However, they will leave if the environment turns bad. This Pokémon is a female-only species with no male counterpart.