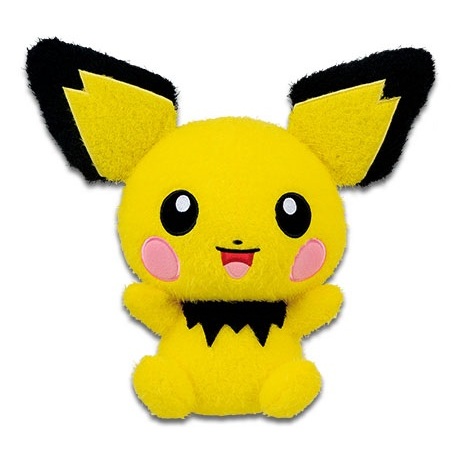 Pichu gets an adorable new addition to the popular Pokedakko plush lineup by Banpresto!

Pichu is a small, ground-dwelling rodent Pokémon with pale yellow fur. Its eartips, collar, and tail are black and angular. Pichu’s pink cheek pouches can store small amounts of electricity, and its tiny nose looks like a dot. Pichu is classified as a quadruped, but it can walk easily on its hind legs. Pichu is a social Pokémon known for its playful and mischievous demeanor. It is usually found in groups and often touch tails with other Pichu as a show of courage, creating a shower of sparks that can make them cry. It is inept at storing electricity, and may discharge if amused, startled, or subjected to shock. However, it cannot discharge without being shocked itself. Charging up is more easily done on days of dryness or with thunderclouds. The crackling of static electricity generated by Pichu is audible. It can zap an adult human, but will surprise itself if it does. Pichu primarily lives in the forest, though it has also been depicted to thrive in urban areas.