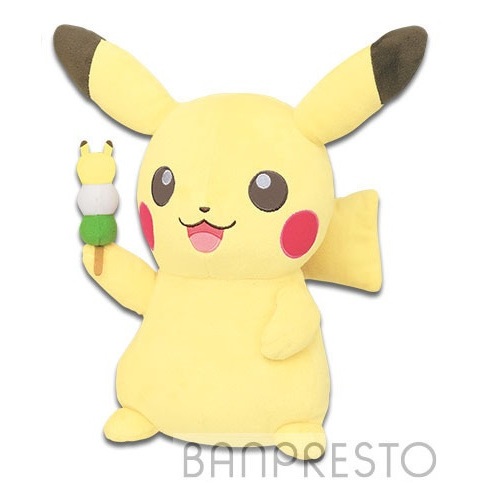 Pikachu, shown here holding dango dumplings on a skewer, gets an adorable new addition to the popular Pokemon Tea Party plush lineup by Banpresto! This release of the series focuses on Japanese sweets!

The Pokemon Tea Party lineup by Banpresto focuses primarily on Pikachu featured with sweets and snacks you would normally see accompanied with a carefree break or even (as you guessed) a tea party. In some cases the lineup focuses on the sweet itself — such as a cupcake, ice cream cone, or donut — with a Pikachu-inspired design or shape! This lineup is also known for using pastel color tones to create a light-heart feel and cute style. Anyone who has a sweet tooth and loves Pokemon will be sure to adore these plush.

Pikachu is a short, chubby rodent Pokémon. It is covered in yellow fur with two horizontal brown stripes on its back. It has a small mouth, long, pointed ears with black tips, and brown eyes. Each cheek is a red circle that contains a pouch for electricity storage. It has short forearms with five fingers on each paw, and its feet each have three toes. At the base of its lightning bolt-shaped tail is a patch of brown fur. A female will have a V-shaped notch at the end of its tail, which looks like the top of a heart. It is classified as a quadruped, but it has been known to stand and walk on its hind legs.