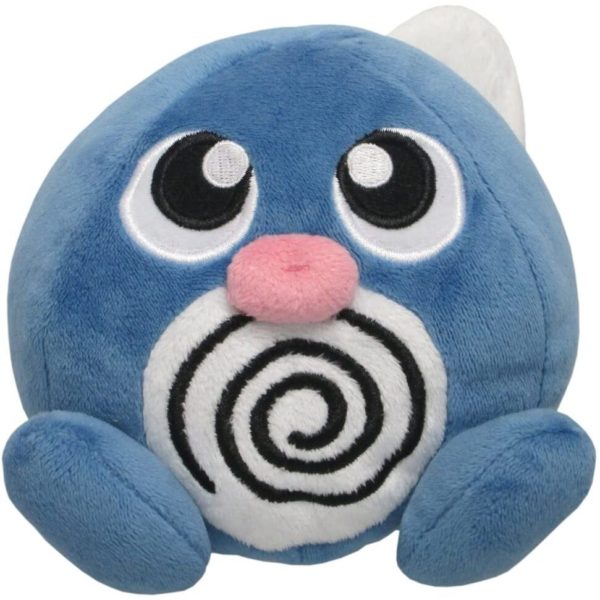 San-ei’s Pokémon All Star Collection plush series features a beautifully detailed version of Poliwag! Some of the highest quality Pokémon plush on the market come from this lineup. Every plush is constructed out of super soft ‘minky’ fabric and weighted with beans to help them sit/pose.

Poliwag is a Pokémon resembling a blue, spherical tadpole. It has large eyes and pink lips. The lips can also act as suction cups for sticking onto rocks. Its skin is very thin, but flexible and difficult to puncture. There is a black and white swirl on its abdomen, which is actually its internal organs showing through its semitransparent skin. The swirl is clearer following a meal and will have a white tinge if the Pokémon is affected by disease. The direction of the belly spiral differs by area; the equator is thought to have an effect on it. It has newly developed legs that are poor at walking and no arms. It has a long, thin tail surrounded by a light-blue, semitransparent fin. Its tail makes it a powerful swimmer. It loves to waddle on land despite the dangers. However, it will quickly return back into the water should it see danger. It cannot walk on land well unless trained everyday.