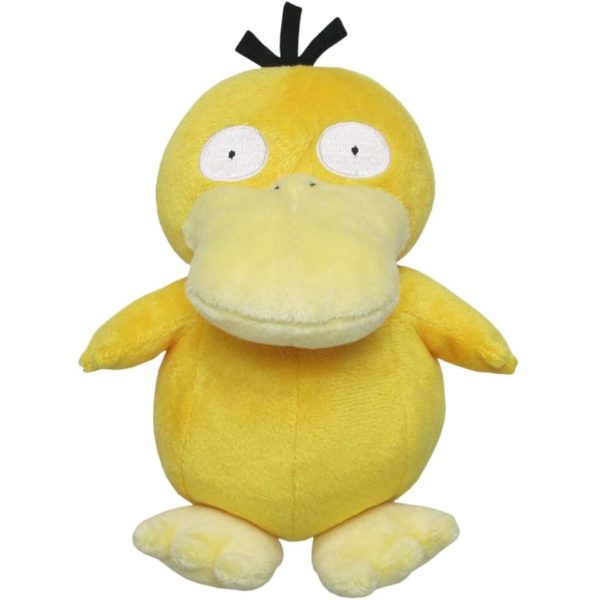 San-ei’s Pokémon All Star Collection plush series features a beautifully detailed version of Psyduck! Some of the highest quality Pokémon plush on the market come from this lineup. Every plush is constructed out of super soft ‘minky’ fabric and weighted with beans to help them sit/pose.

Psyduck is a yellow Pokémon resembling a duck or bipedal platypus. On top of its head are three thick strands of black hair and it has a wide, flat cream-colored beak. Its eyes seem vacant and have tiny pupils. Its legs and tail are stubby, and it has cream-colored webbed feet. There are three claws on each of its hands. Psyduck is constantly stunned by its headache and is unable to think very clearly. It usually stands immobile, trying to calm its headache. However, when its headache becomes too severe, it releases tension in the form of strong psychic powers. The use of these powers produces brain waves identical to those seen in sleepers, and the Pokémon is unable to recall these episodes. Psyduck lives in freshwater lakes and small ponds, but can be seen in rivers in tropical areas as shown in Pokémon Snap.