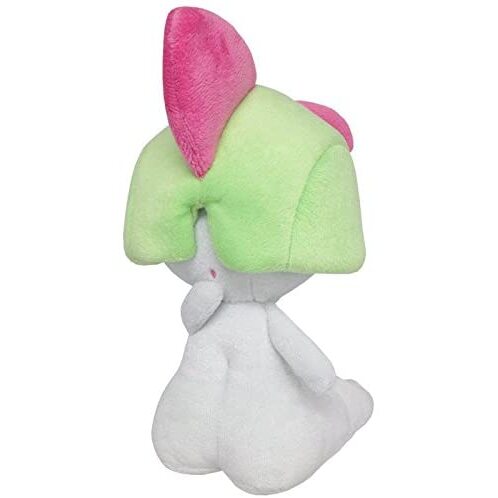 San-ei’s Pokémon All Star Collection plush series features a beautifully detailed version of Ralts! Some of the highest quality Pokémon plush on the market come from this lineup. Every plush is constructed out of super soft ‘minky’ fabric and weighted with beans to help them sit/pose.

Ralts is a humanoid Pokémon with a white body. It has thin arms and legs that widen toward the feet. There is a wispy extension trailing off the back of its feet, creating the overall impression of a nightgown or oversized dress. Most of its face is covered by green hair that resembles a bowl cut, but a pair of pinkish red eyes is sometimes visible. There are two flat, red horns on top of its head: a large one toward the front and a smaller one at the back. Ralts uses the horns to read people and Pokémon’s emotions. Warm feelings cause its body to warm as well, but it hides if it senses hostility. If its Trainer is in a cheerful mood, Ralts also becomes cheerful and joyous. It is known to inhabit urban areas, but it does not normally show itself to humans. However, when it senses happy feelings, it will approach people.