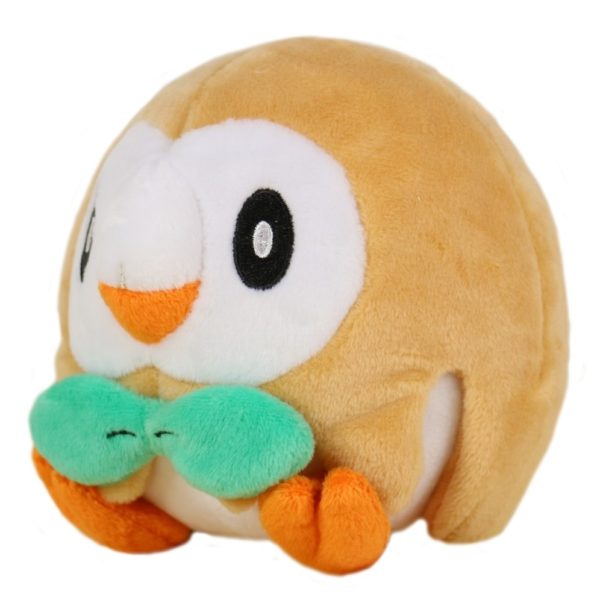 San-ei’s Pokémon All Star Collection plush series features a beautifully detailed version of Rowlet! Some of the highest quality Pokémon plush on the market come from this lineup. Every plush is constructed out of super soft ‘minky’ fabric and weighted with beans to help them sit/pose.

Rowlet is a small, avian Pokémon resembling a young owl with a round body and short legs. Its plumage is primarily beige with a white underside and facial disc. The facial disc itself is in the shape of two overlapping circles. It has large black eyes and a stubby beak. The top part of its beak is white, while the lower half is an orange-brown. Its feet have two forward-facing toes and one backward facing toe; they are the same color as the lower half of its beak. Two leaves sprout from its chest, arranged to resemble a bowtie. Additional leaves form its tail and line the undersides of its wings. A nocturnal Pokémon, it stores energy during the day through photosynthesis. It approaches opponents by silently gliding, before unleashing a volley of kicks. This Pokémon is able to rotate its head almost 180 degrees, and has excellent night vision.[1] Its feathers are as sharp as blades, which it launches at foes from the air. Rowlet feel most relaxed in tight, dark spaces.