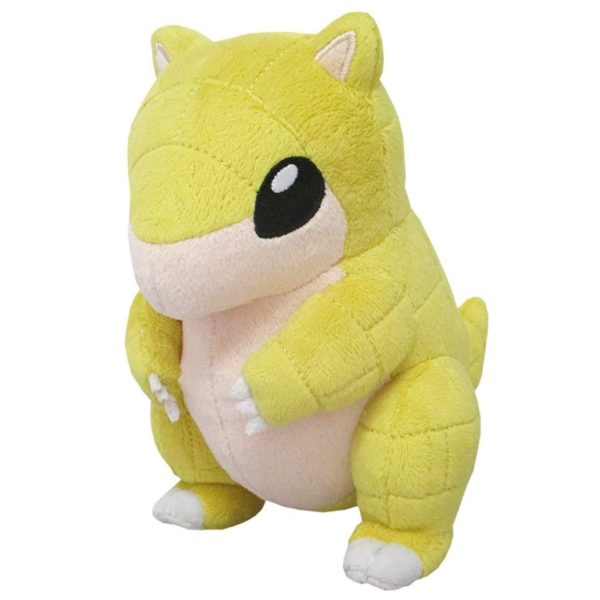 San-ei’s Pokémon All Star Collection plush series features a beautifully detailed version of Sandshrew! Some of the highest quality Pokémon plush on the market come from this lineup. Every plush is constructed out of super soft ‘minky’ fabric and weighted with beans to help them sit/pose.

Sandshrew is a bipedal mammalian Pokémon, but runs on all fours in the anime. Its brick-patterned yellow hide is dry, tough, blends in with desert sand, and protects its soft white underbelly and muzzle. Sandshrew has blue, almond-shaped eyes, a pointed snout, and triangular ears with white insides. Its tail is thick and conical. It has two long claws on each foot and three sharp claws on its forepaws, which are used to burrow. Sandshrew spends much of its time hidden underground in deep burrows. It only emerges to lunge and drag in passing Bug-type Pokémon. Sandshrew can quickly curl into a tight ball to protect itself from great falls and opponents, but may also throw sand at attackers. While its body can efficiently absorb water to facilitate life in the desert, Sandshrew has been found in caves as well.