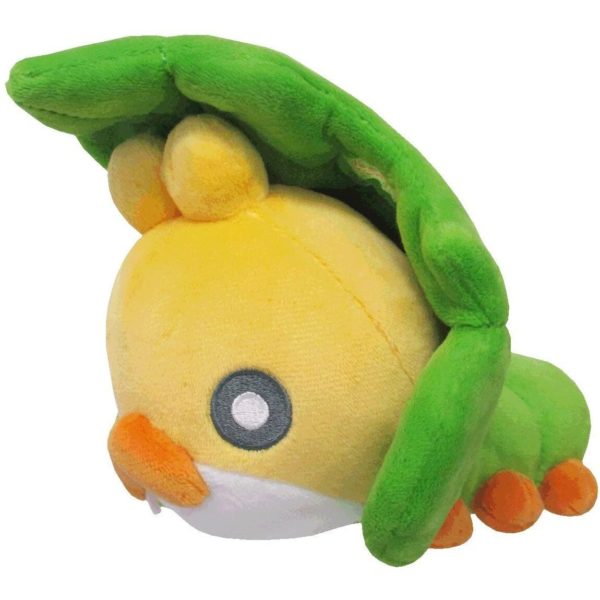 San-ei’s Pokémon All Star Collection plush series features a beautifully detailed version of Sewaddle! Some of the highest quality Pokémon plush on the market come from this lineup. Every plush is constructed out of super soft ‘minky’ fabric and weighted with beans to help them sit/pose.

Sewaddle is a caterpillar-like Pokémon with a broad, bitten leaf enfolding its head like a hood. Its large, spherical head is an orange-yellow with two small, close-together knobs on its forehead. Sewaddle’s eyes are black and circular, and its mouth has a downward-pointing, crescent-shaped orange snout with a sharp tiny tooth at either end. The underside between the snout and its neck is white. Its green body has three segments with a pair of stubby, spherical orange legs on each segment. Sewaddle makes itself leafy clothes using chewed-up leaves and a thread-like substance it produces from its mouth, though Leavanny tends to make its first set after hatching. By folding it over its face, its leafy hood is used to help hide it from enemies, whether awake or asleep. It has been shown to eat berries, but when food is scarce it will eat its leafy clothing as an alternative.