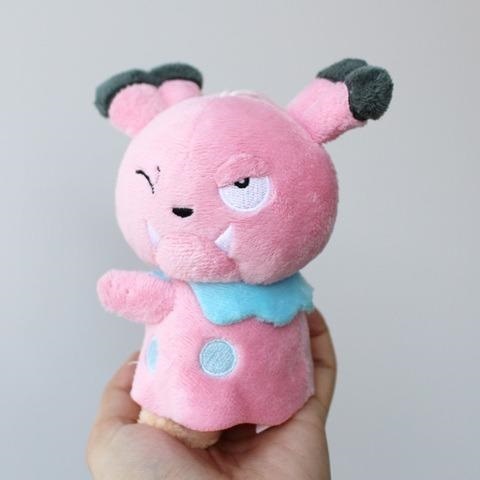 Snubbull is open for hugs with this adorable new addition to the popular Hopepita plush lineup by Banpresto!

Snubbull is a pink, bipedal, bulldog-like Pokémon with blue polka dots covering its body. It has loose skin that drapes to cover the lower part of its body, giving it the appearance of a dress. There is a small, blue ruff around its neck. It has a pronounced underbite, but it still has powerful jaws. Additionally, it has two earflaps that are flat, curved, and tipped with black, and a small, shiny black nose. Its feet are beige with three toes and a circular pink paw pad, while its arms are short and stubby.

Snubbull, as seen in the anime, possesses the ability to use keen sense of smell to track things down. Despite this Pokémon’s fierce looking face, it is very playful and affectionate making it a popular companion among women. According to The Complete Pokémon Pocket Guide, it is also very devoted and loyal. It is not aggressive and tends to prefer to scare away its opponent rather than fight. However, it is saddened that others run from its frightening appearance. Snubbull wander around urban areas.