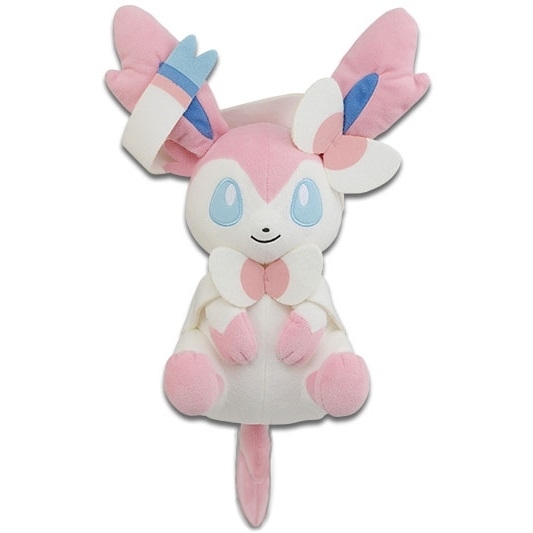 Sylveon gets an adorable new addition to the popular “Yuttari” I Love Eievui plush lineup by Banpresto!

Sylveon is a quadruped, mammalian Pokémon covered with pale cream-colored fur with pink feet, ears, and tail. It has light blue eyes, long ears with blue interiors and thicker fur, a tiny nose, and two stray tufts of fur on top of its head. There are two bows on its body: one at the base of its left ear and one on its neck. Each bow is pale cream with a pink center and trails a pair of ribbon-like feelers. The feelers are pale cream with light blue tips. Before the tip of each feeler is a pink and then a dark blue stripe. It has slender legs with small, three-toed paws and a fluffy, slightly curved tail. Sylveon’s ribbon-like feelers emit a soothing aura. When hunting, it swirls its feelers as a distraction while the aura weakens feelings of hostility in its prey. It will also wrap its feelers around the arm of its Trainer, which allows it to read their feelings.