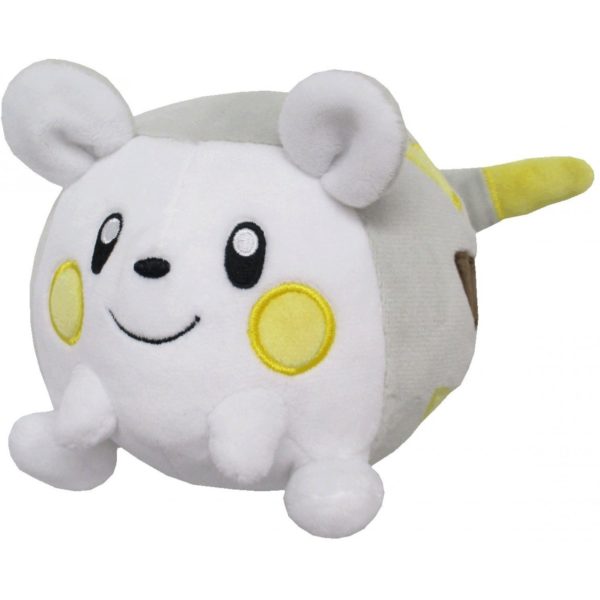 San-ei’s Pokémon All Star Collection plush series features a beautifully detailed version of Togedemaru! Some of the highest quality Pokémon plush on the market come from this lineup. Every plush is constructed out of super soft ‘minky’ fabric and weighted with beans to help them sit/pose.

Togedemaru is a spherical, rodent-like Pokémon. Most of its front is white, while its back is primarily gray. It has black eyes, a short pointed snout with a black nose, rounded ears, and a circular, yellow marking on each cheek. Scattered across its back are 14 fur spikes that appear as yellow and brown triangular markings. When attacking, surprised, or agitated these spikes will stand straight up. There is a tail-like needle on the back of its head. The needle is gray with a yellow tip and is shaped like a lightning bolt. Additionally, it has stubby arms and legs. Togedemaru uses the needle on top of its head to attract and gather electricity. Groups can be seen gathered with their needles standing upright, waiting to be struck by lightning on stormy days to make up for its somewhat limited electric capacity. Some Trainers use its ability to absorb electricity as strategy in battle. The opponent is coaxed into unleashing an Electric-type attack, and then has that power turned against it. When it is pleased, this Pokémon will curl into a ball and roll around uncontrollably.