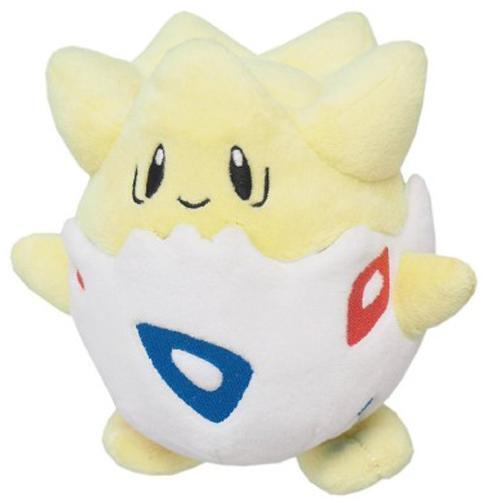 San-ei’s Pokémon All Star Collection plush series features a beautifully detailed version of Togepi! Some of the highest quality Pokémon plush on the market come from this lineup. Every plush is constructed out of super soft ‘minky’ fabric and weighted with beans to help them sit/pose.

Togepi is a small, light yellow Pokémon with a round body that is still encased in its eggshell. Togepi does not shed its shell. The Egg has red and blue shapes on it. Togepi has stubby hands and round feet with two toes each. Togepi has black eyes and five spikes on its head that seem to form a crown. It also has semi-oval, brown pads on the soles of its feet. Togepi is able to release poison from the spikes on its head. The anime has shown that it can retract into its shell, which it usually does to sleep. It is able to siphon the positive energy of others, and then release it to those in need of it. It has a very joyful nature. As a result, it is said that it shares its joy with those who take care of it. Because of its disposition, Togepi is seen as a sign of good luck, especially if a Trainer is capable of getting a sleeping Togepi to stand. It is also shown in the anime that Togepi can act very maliciously at times, causing havoc and bad luck to its enemies. Although it is rare in the wild, Togepi can most commonly be found living within the forests.