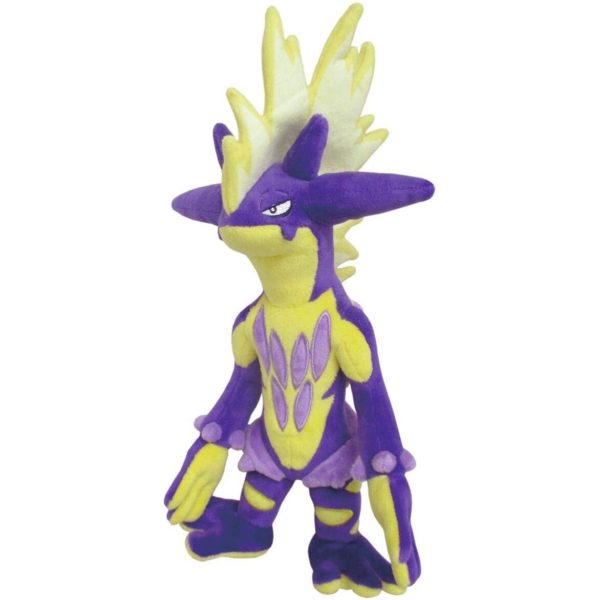 San-ei’s Pokémon All Star Collection plush series features a beautifully detailed version of Amped Form Toxtricity! Some of the highest quality Pokémon plush on the market come from this lineup. Every plush is constructed out of super soft ‘minky’ fabric and weighted with beans to help them sit/pose.

Toxtricity is a bipedal, lizard-like dual-type Electric/Poison Pokémon introduced in Generation VIII. Amped Form Toxtricity has a purple-colored body and a yellow underbelly. It has electric frills that extend from its front nose to its neck. It has black eyes with white sclera. It has two short horns on top with large horns behind both sides of eyes. On its back are two smaller electric spikes along with four purple horns on four yellow spots each. Six organs protrude on its chest. It wears a crescent-shaped body part with seven spikes located between the lower body. Both of its wrists have four spikes each. There are three long strips on its two legs. It also has a yellow underside on its three-fingered hands and underneath its feet. Amped Form Toxtricity are known to be short-tempered and extremely confident. This form aggressively attacks anything that makes eye contact with it.[1] It chugs stagnant water to absorb the toxin it contains. It then breaks down the poison in order to generate electricity.