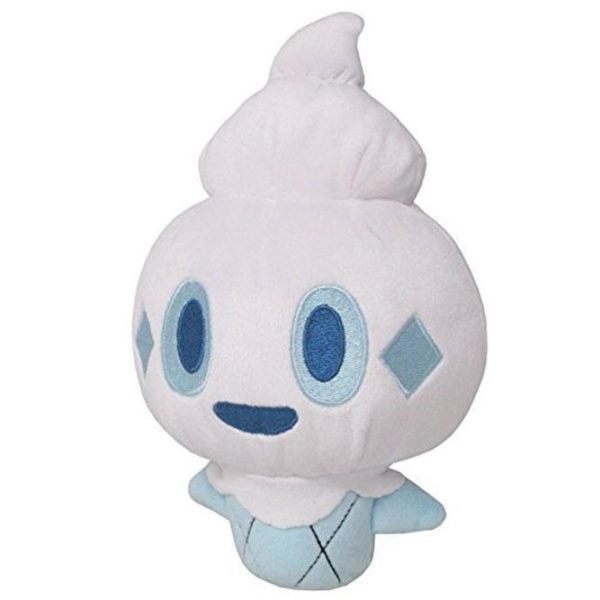 San-ei’s Pokémon All Star Collection plush series features a beautifully detailed version of Vanillite! Some of the highest quality Pokémon plush on the market come from this lineup. Every plush is constructed out of super soft ‘minky’ fabric and weighted with beans to help them sit/pose.

Vanillite heads are covered with something resembling soft serve vanilla ice cream. Beneath this lies its actual head, which is made of the same icy material as its body. It has dark blue eyes, a dark-blue mouth, and light blue crystals on its cheeks. Its small body is adorned with specks of ice and has stubby arms. The snow on a Vanillite’s head can melt with heat or repeated touching, leaving it with a “bald” appearance of simply an ice creature. In the Japanese Pokédex 4-coma, it becomes embarrassed if seen in this state. Vanillite are born from icicles that are hit by morning sunlight and wish not to melt. It can blow winds as low as -58 °F (-50 °C), which causes it to create ice crystals and make it snow in nearby areas when it exhales. It sleeps buried under snow and gains energy from the morning sun. In hotter regions, it is treasured by households, though it shrinks little by little. Glalie is a natural predator of Vanillite.