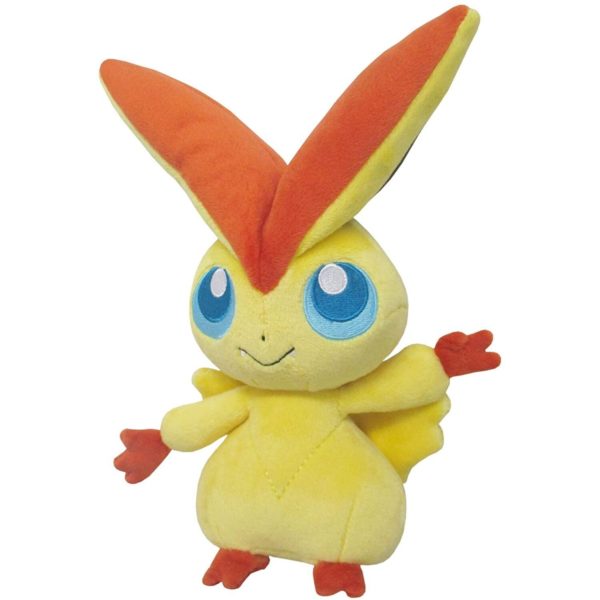 San-ei’s Pokémon All Star Collection plush series features a beautifully detailed version of Victini! Some of the highest quality Pokémon plush on the market come from this lineup. Every plush is constructed out of super soft ‘minky’ fabric and weighted with beans to help them sit/pose.

Victini is a small, rabbit-like Pokémon with large, pointed ears which form the letter V. It has large, blue eyes and a round, cream-colored head, which is comparatively large compared to its small, cream body, while the tops of its ears, crest, and extremities are all orange. Its bulbous arms and legs are rounded to make a sort of “cuff” before ending with small, three-fingered hands and two-toed feet. It has two pointed teeth that can be seen on its upper jaw. It also has two cream winglike tails, which allows it to fly. Though timid, it is a caring Pokémon; it will fight if its friends are in danger. Victini is said to bring victory to the Trainer that befriends it. It produces an infinite amount of energy within itself and can share it with others by touch. It can also become invisible. As shown in White—Victini and Zekrom and Black—Victini and Reshiram, it can send visions to people. It has been shown to enjoy eating macarons, although it sometimes chokes on them. In the same movie, it has also been seen near an Oran Berry bush. Victini is the only known Pokémon that can learn Searing Shot.