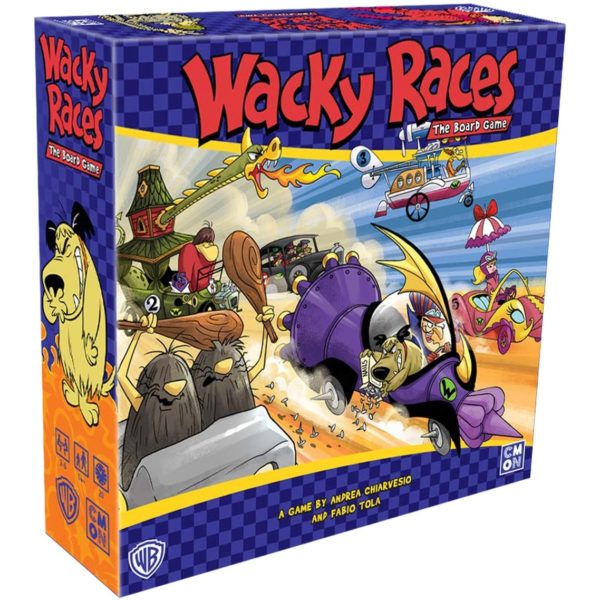 Wacky Races: The Board Game

In Wacky Races: The Board Game, players take control of their own racer from the classic Hanna-Barbera cartoon such as The Slag Brothers, The Gruesome Twosome, Penelope Pitstop, or Peter Perfect. Each one has their own unique stats and special abilities. The goal is to get to the finish line first by placing down cards from their hand representing the terrain tiles their cars will move to. However, the game-controlled Dick Dastardly and Muttley in their Mean Machine will be setting up traps and using the car’s secret weaponry against them every mile along the way. Only one car can be the first across the finish line and claim the checkered flag.

CMON Limited is off to the wild-world of cartoon racing with their upcoming release of Wacky Races, in partnership with Warner Bros. Consumer Products, based on Warner Bros.’ popular Hanna-Barbera cartoon. Recreate the crazy, fun, and yes… wacky races from the adventurous 60s animated series.

Wacky Races puts players in the “driver’s seat” with control of their favorite drivers from the cartoon series, including The Slag Brothers, The Gruesome Twosome, Penelope Pitstop, Peter Perfect, and more, each with their own car equipped with special abilities. They’ll compete against each other—and the game-controlled, mustachioed Dick Dastardly and his wheezy pup Muttley. Each racer is depicted with amazing art from the Warner Bros. archives and CMON’s artist Giovanna Guimarães and beautifully sculpted miniatures.