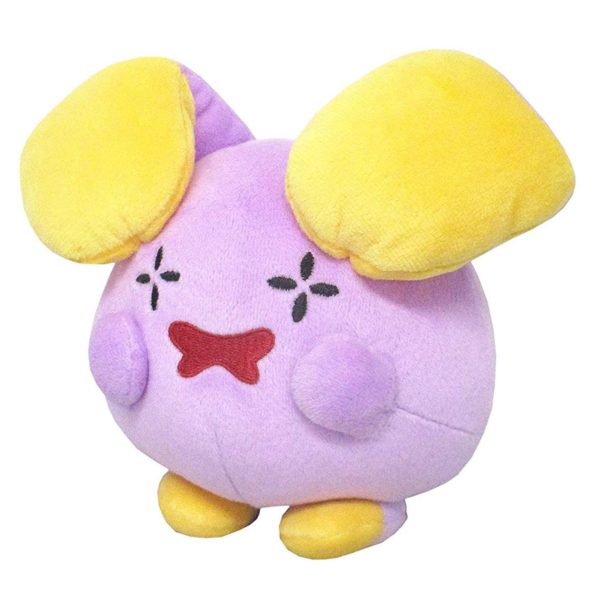 San-ei’s Pokémon All Star Collection plush series features a beautifully detailed version of Whismur! Some of the highest quality Pokémon plush on the market come from this lineup. Every plush is constructed out of super soft ‘minky’ fabric and weighted with beans to help them sit/pose.

Whismur is mauve, bipedal Pokémon with a spherical body. Its eyes are black and shaped like plus signs, and it has a simple, wide mouth. Two small openings on top of its head act as its ear canals. Covering its ear canals are long, yellow-tipped flaps resembling rabbit ears. It has stubby arms and yellow-tipped feet that lack toes and have plus shaped markings underneath. Above its small, plug-like tail is a yellow, crescent marking. There is a hole in the center of its tail. Whismur are a timid species, being easily frightened by loud noises. Whismur’s murmurs are barely audible, but when it senses danger, it lets out an ear-splitting cry as loud as a jet plane taking off. Startled by its own cries, it will cry louder. When it finally stops crying, it will fall asleep from exhaustion. Because it breathes through its ear canals, it can cry continually. However, it will stop crying if its ear covers are shut.