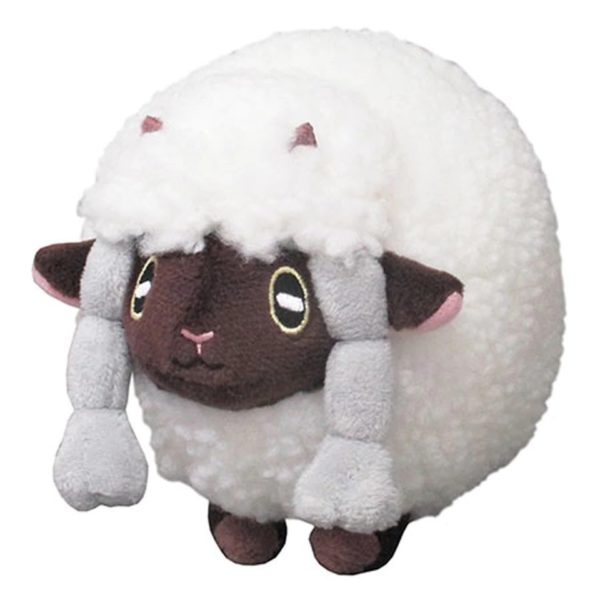 San-ei’s Pokémon All Star Collection plush series features a beautifully detailed version of Wooloo! Some of the highest quality Pokémon plush on the market come from this lineup. Every plush is constructed out of super soft ‘minky’ fabric and weighted with beans to help them sit/pose.

Wooloo is a sheep-like Pokémon with a thick coat of white wool that makes it look spherical. Its small, black head pokes out of the front of the wool, along with two short horns. Its eyes have yellow sclerae, black irises, and white, horizontal pupils. Two large ears are visible behind gray strings of wool that resemble braided pigtails. Its hoofed legs are short and mostly hidden by the wool, along a with a tail that is barely visible on its rear end. Wooloo have an extremely fluffy body which can serve as a cushion and help it survive even when falling off a cliff, and stand up without injures. The fur grows back quickly in three months even when shaved. The fur is very popular in Galar, being used for clothing, carpets, very strong cloth, and specialty product. If the fur grows too long, it will be unable to move. Wooloo live in herds mimicking the leader or trainer. They can escape from enemies by simply rolling away due to disliking conflict.